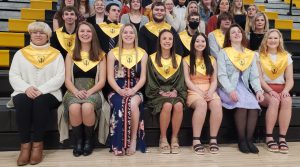 Van-Far students and staff were joined by parents and grandparents in the high school gymnasium last week. They gathered to witness the induction ceremony of 12 new National Honor Society members for the Van-Far chapter. Van-Far student Abigail Hunn conducted the introduction of the ceremony.
“We are gathered here to formally recognize those students who have successfully completed their candidacy and are being inducted as members of our NHS chapter,” said Hunn. “For current and former members who may be among our guests, we hope that this will serve to remind you of the standards of excellence that you are charged with maintaining as members of the nation’s oldest, largest and most prestigious student recognition program,” she added.
Members of the Van-Far NHS chapter discussed the four qualities that serve as standards for the society. These qualities included scholarship, leadership, service, and character. After a brief description of these qualities, the inductees were asked to stand, raise their right hands, and repeat the pledge of the NHS. After the pledge, member Devyn Keller announced the names of the new inductees. Those included were: Makenna Engh-Hoffman, Gage Gibson, Karisa Hayden, Jesse Kaufman, Jayden Kurz, Katelyn McCurdy, Katelyn Pargeon, Kristen Shaw, Clara Wallace, Carmen Wilburn, Ryan Null and Drake Woodson. After coming forward to sign their names in the chapter register, NHS adviser Teresa Winders gave a closing statement to recognize the efforts of the new inductees.
“I want to take a few minutes to acknowledge all that these kids do and have done, day-in and day-out at the high school,” said Winders. “They show up. Let me say that again, they show up. Each and every day they do the tasks set before them. They do not make excuses or blame others when they do not succeed. They just do what they are supposed to do, and it shows. It is evident in their attendance, it shows in their behavior, it shows in their grades, and most importantly, it will continue to show as they journey through life. I am so proud of each and every one of them. And so, congratulations to our new inductees. We have noticed your hard work and the NHS is happy to welcome you,” she added.
According to their website, The National Association of Secondary School Principals officially established NHS in 1921. Though many local and regional honor societies existed prior to 1921, no nationwide organization had been founded. Under the leadership of Dr. Edward Rynearson, principal of the Fifth Avenue High School in Pittsburgh, the organization grew from the original Alpha Chapter at the Fifth Avenue School to more than 1,000 chapters by 1930. Equipped with a constitution, an emblem and motto, and a group of dedicated principals as coordinators, the new NHS organization quickly developed into one of the country’s leading educational groups.
Today, it is estimated that more than 1 million students participate in NHS activities. NHS chapters are found in all 50 states, U.S. Territories, Canada, and around the world. Chapter membership not only recognizes students for their accomplishments but challenges them to develop further through active involvement in school activities and community service.