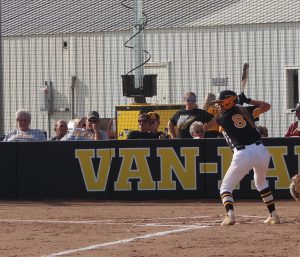 The Van-Far Lady Indians played their home opener on a new field last week against North Callaway. After an early lead for North Callaway, the Lady Indians did not recover a 15-4 loss.
The Van-Far Indians battled the Russellville Indians last week but fell 19-6.
“Russellville started with the ball and scored in five plays,” said coach Lucas Gibson. “We then fumbled on our own 40 but we were able to hold them to a three and out on that possession. Our second offensive possession was no different and we went six plays before we punted. On the first play of defense after that, Jackson Fischer forced a fumble, which Pacey Reading recovered. We then stalled at their 40 ending the quarter. In the fourth quarter, after a quick four play 13 yard possession we received the ball at our own 41 down 6-13. We went three and out. On our next defensive series, we got them to a third down and 8-yard situation, where a mental mistake by our defense allowed a 30 yard touchdown for Russillville. The offense again failed to move the, but the defense forced a quick fumble, giving the offense another attempt. Several offensive plays later the game ended,” he added.