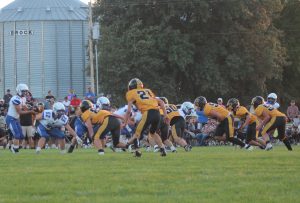 The anticipation was building until last Friday night, as the Van-Far Indians played their first game on the new football field. Adding icing to the cake, the Indians won, beating the Montgomery County Wildcats with a score of 14-12.
“What a home opener!” said Head Coach Lucas Gibson. “I knew these kids could do it and they made school history last night by winning the inaugural game on the new field. There were so many people who came together to make the night special for the kids,” he added.
Last-minute work on the field included the installation of new lights and a makeshift media box. Because the new bleachers were not ready, the Vandalia Area Fair Board agreed to let the school use the bleachers from the fairgrounds. Van-Far Superintendent John Fortney said that it came down to the wire on these last-minute projects.
“We had just finished getting power to the lights and wiring the scoreboard,” said Fortney. “It is still considered a construction site at this time. Next week the fencing will go in around the track. After that, they will come back and pave and spray the track for the rubberizing process. After all the construction is finished, we will do grading, leveling and seeding. We are hoping to have it all completed sometime in October. As for the permanent bleachers, we saved all the aluminum from the original bleachers with the goal of bidding out a job to have new bleachers built. You don’t necessarily have to have them to play a football game, but we definitely want them so the fans can have adequate seating,” he added.
Many Indians fans and visitors brought their own chairs and set them up around the track during the game. The bleachers were packed, and many others spectators were standing as the game progressed.
Gibson said that the Indians were off to a rocky start.
“We won the toss but failed to convert and had to punt,” he said. “The Wildcats drove the field and were in scoring position when Reece Culwell intercepted the ball. We drove 39 yards to end the first quarter. Offense was unable to convert cleanly, as a penalty called back a touchdown to start the second quarter. In the fourth quarter, the Indians moved the ball 78 yards, with 50 of those coming from a quarterback keeper from Nikos Connaway. The 2-point conversion was successful by Brandon Eoff,” added Gibson.
Gibson said that he and the team were grateful for all of the help and the positive support that they have received from the community.
“We so appreciate everything that everyone did from the Booster Club setting up a special concession stand, to the teachers tailgating before the game, to the Varsity Cheerleaders sponsoring the Youth Cheer Night, and last but not least, to the community staying until the end. Even though everything with the field isn’t finished, the kids were thankful to get to play at home and hope the community will continue to come out to support them,” said Gibson.