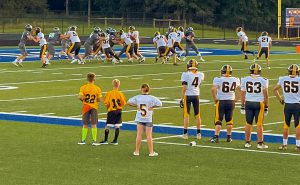 The Van-Far Indians fell to the South Callaway Bulldogs Friday night, 44-22, because of early mistakes. The Indians managed to come within six points at halftime but didn’t stop the South Callaway offensive in the second half.
New head coach, Lucas Gibson, said Van-Far was starting six freshmen on offense and five on defense with its smaller roster. He gave some highlights of the game.
“They showed some grit. They’re young kids,” said Gibson. “A couple turnovers cost us big in the first quarter. Nikos Connaway threw for 33 yards with 100% completion. Reece Culwell scored on a 28 yard catch just shy of the end zone and fought to get the team’s first touchdown of the season. Brandon Eoff followed with a 2-point conversion. Gage Gibson ran for 23 yards in five carries to keep momentum moving in the right direction. In the fourth quarter, our first series did not go well. We have to recognize when we can gain better placement during kickoffs. We didn’t stop playing and earned 46 positive yards as the clock ran out,” he added.
The Indians will play Russellville on Friday night.

In softball, the Van-Far Lady Indians played at the Hallsville Tournament on Saturday. They began with a 3-0 loss to Salisbury. The second game was better played. Dalana Gay pitched a good game, throwing 34 strikes out of 56 pitches. The Lady Indians won 14-2 against Sturgeon. After the win, they played another game for Constellation. They fell against Westran 8-2.