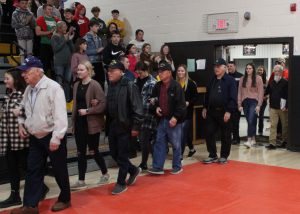 The 2022 Van-Far Veterans Day celebration took place last Friday in the high school gymnasium. Junior High Communication Arts teacher Teresa Winders welcomed the guests to the event.
“At this time, please join me in welcoming our honored guests, the men and women of the United States armed forces,” said Winders. “They are being escorted by members of the National Honor Society as well as family members of the veterans,” she added.

After the presentation of colors, there was a Fuselier’s demonstration conducted by Missouri Military Academy cadets. Mara Jensen, NHS president, lead the pledge of allegiance and the Van-Far Junior High Band and Choir performed the National Anthem. The Fallen Soldier’s Table was demonstrated by Carmen Wilburn and Vivian McFadden. Taps was performed by Richard Hayden. Guest speaker was Navy veteran Frank Vestal, who spoke about life in the military.

“I am honored to have been invited to speak here today,” said Vestal. “I was 17 years old when I enlisted and a lot of us were just young kids. We didn’t have any certain direction and we were just average teenagers like many of you here today. It was a different time though back then. On a warship, we would watch movies that were actually on a reel before the time of video cassettes. I enlisted in November of 1971. During boot camp there was a lot of training and testing that took place. The company that I was assigned to was a diverse group, which we learned was important to the success of our testing. AS I look back 50 years after my service, I realize that we were much like the Dream Team. For those who do not know about the Dream team, they are a man who cannot see and a woman who cannot walk. Working together, they are able to go on hiking adventures as the blind man carries the disables woman on his back. He is her lags and she serves as his eyes. They serve one another without having any certain great athletic attributes. That is the way that a ship works. I don’t feel that there was anything important that I did individually. But as a team, we did some pretty amazing things,” he added.