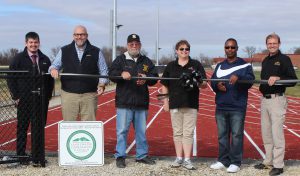 Members of the Van-Far R-I school district held a ribbon cutting ceremony for the newly completed track and field last week. Superintendent John Fortney said that a grant paid for half of the expenses of the construction.
“It was a grant that helped to pay for half of the cost of the new track,” said Fortney. “The football field was separate. The Green Space Grant that we received was just over $300,000 that we received in matching funds from the Department of Natural resources. We are very thankful for them and all of the work and effort from the Department of the Interior. It was quite a process with getting everything in line during the pandemic, but they really stuck with us step by step and helped us to get the job done,” he added.
The new football field was completed earlier this year just in time for the 2022 football season. The Van-Far Indians made history as they won the first game to be played on the new field. Fortney said the new track would be a benefit to the entire community.
“This is not only a benefit to our athletes but it will be open to the public as an exercise space for the citizens in town. This will be open after school hours and will be a good way to draw people in. We already have one walking trail in town at Tri-County Park but now there will be even more options for those who want to get out and walk. With the expansion here on the school grounds we have also been able to add handicap parking spaces and spaces for law enforcement and ambulances for the games. Emergency workers will be close to the field in the event that they need to enter the facilities,” said Fortney. As the 2022 project on the new athletics complex comes to a close, which included a new softball field, football field and track, there are only a few jobs left to do to see it finished.

“we are wrapping up the fencing around the track and some drainage issues around the field,” said Fortney. “This is the first time in the history of Van-Far that we have had a track. In the past, funds were not available and numbers for the track program were not substantial. But if you look at the history of the track program here, Van-Far has won two state championships within a few years of each other within the last decade. This may also be a perk for bringing new residents and industry into the area. The students are excited about the new track. We will be hosting a track meet this coming spring and hopefully within a few years, we will be hosting a district track meet at the championship level here,” he added.