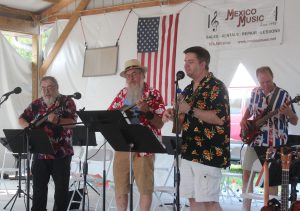 A new event took place on Saturday at Hickory Ridge Orchard in Mexico. It was a ukulele festival, organized by David Reetz, owner of Mexico Music. The event was free to the public and had a variety of musicians playing ukuleles, violins, harmonicas, drums, a harp and also numerous vocalists. The lineup included performances by the Reetz family, the Glory-land Band, the Mexico Music Ukulele Group, The Ukulele Fight Club of Columbia, Mo., and others.
“I started organizing the groups about a year ago,” said Reetz. “I had been seeing ukulele festivals pop up in various places so I thought I would ask some of my local friends who perform if they would be interested in it. Organizing the event wasn’t too challenging because we weren’t booking anyone from a long distance. We had a lot of musicians performing from here in Mexico and we had several groups from out of town,” he added. One of the groups that came to perform at the festival, “The Ukulele Fight Club of Columbia,” took the stage at 3 p.m. One of the members, Bradd Anderson, said that the group originally started in St. Louis.
“According to historical posts on the Facebook group, it was started by two people named Thom Pallozola and Johnny Vegas,” said Anderson. “Johnny had shows, called ‘Stage Nights,’ which attracted various bands. Thom and Johnny started having some jam sessions in St. Louis that attracted members of these bands, where they would all sit around and play ukuleles. They started creating posters that invited people to come ‘fight with ukuleles,’ thinking the idea was fun. Since it was around the time of the Fight Club movie, they started calling their gatherings the Ukulele Fight Club. Today, we meet at Dickey’s Barbecue Pit in Columbia on the first and third Mondays of the month at 6:30 p.m.,” he added.
Members of Mexico Music helped set up for each group that played during the event, moving microphone stands and arranging music stands. Reetz said that there are currently about 40 students attending lessons there.
“We have about 40 students and we have been in business for 30 years. Over half of those students are learning to play the ukulele right now. Some of them are learning dual instruments like ukulele and guitar, or ukulele and bass. I also have a piano teacher that has about 15 students, a drum teacher with about 10, and a violin teacher that has five. Our main focus has been offering lessons, but we do some repair work and we also have retail merchandise available,” said Reetz.
According to Reetz, a lot of people are finding the ukulele to be a great way to get started playing an instrument, as it is relatively affordable and easy to learn. Anderson said that he did just the opposite and transitioned from guitar to ukulele.
“I discovered the ukulele while I was working on a project in Hawaii. I wanted to bring back something with me that was a part of that culture. So, I learned how to play after coming back home and my guitars have been collecting dust ever since,” said Anderson.