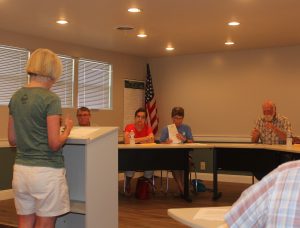 After delaying a decision to assist Tri-County Care Center at Vandalia’s July 12 regular board of alderman meeting, a special meeting was called on Wednesday, July 27, to continue the discussion.
A resolution was presented to assist TCCC in making their third payroll, and City Administrator Darren Berry recommended a grant in the amount of $90,000 to help get the facility through the month of August. Connie Hesse, board chair for TCCC, gave an update since the last meeting.
“I would like to give an update,” said Hesse. “When we were here last it was suggested that we come up with a plan of action, and I believe that was given to you as of Monday of this week. I am sure that you have read through it and if you have any questions let us know,” she added.
Members of TCCC staff were in attendance during the meeting and answered questions that were raised by the aldermen.
They asked whether the facility has made recent progress correcting items from earlier state inspections. Former TCCC administrator, Penny Kampeter, who has been assisting the facility, said that they have been working to prepare for the next state visit and should be in good shape. Accounts Payable Coordinator Kaylyn Evans said that the estimated number of residents are at around 40.
“That number is down recently from 49. Our break-even is approximately 60 residents. We have lost staff and have had open positions for years,” she said.
The aldermen also wanted to know how much funding the facility had received from COVID-related assistance. Evans stated that since 2020, they had received more than $1 million.
After questions and answers, Berry gave his recommendation.
“We have reviewed the plan that we asked for from TCCC. Tonight, we are here to consider this resolution. I give my recommendation that we approve this resolution to give TCCC $90,000 to assist them in making their payroll. Businesses shutting down is always a tragic situation with job losses and economic impact. But in this situation people would also have to uproot their mom and dad, or grandma and grandpa to another town,” he added.
Alderwoman Janet Turner, Ward II, made a motion to approve the resolution to give $90,000 to TCCC to assist in making payroll. The motion failed to receive a second, after which the meeting was adjourned.
On Friday, July 29, TCCC board members held a special meeting to determine the fate of TCCC. After discussion, the board unanimously voted to temporarily shut it down. On Monday, Aug. 1, it was made public that TCCC would close its doors at the end of the month. This will result in the relocation of the residents who currently live at the facility. Board members have implied that the closure may be a temporary situation, with the possibility of a private company taking over the nursing home. A meeting with residents was scheduled for Aug. 3.