The Van-Far Community Tree is closer than you think 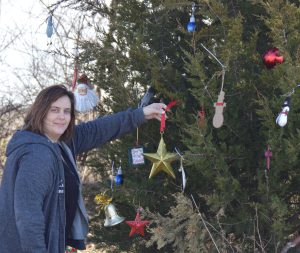 A partially decorated tree stands alongside a rural road near Vandalia. It boasts Christmas ornaments that have been added by random visitors that have happened upon it. Some of those who placed decorations on it were in a competitive search to find its location. In the Facebook group ‘The Van-Far Community Tree’ there were clues posted that would lead searchers to the tree.
“It won’t be hard to see me because I always have a low glow on me at night. People all over the U.S. can benefit with some light. But if you must see the tree, look for a road that leads to me,” read the post.
Instructions for those who are lucky enough to find the tree were also posted in the Facebook group.
“Hang your ornament. Take a picture of you and your family and post it to the Facebook page. Then nominate the people you would like to find the tree. Take a picture of the clues and then send it to them.”
Jill McCurdy, who started the group and chose the tree, said that she got the idea from a friend in Illinois.
“A friend of mine in Illinois was posting pictures of a community tree on Facebook,” said McCurdy. I thought that the idea was really cool, so I contacted her and asked her how it works. She said to simply pick a tree, reach out and contact the property owner where the tree is located to get permission to use it. After getting the basics about it I decided to go forward. I drive a bus so as I was driving I was always looking around for a good tree to use. I was on my way to a 4-H event with my kids when I found the right one. So, after acquiring permission from the property owner to use the tree, I came up with some clues and began nominating people,” she added.
Another part of the clues included a more detailed piece of information regarding the exact location of the tree.
“The hundreds place added to the tens place will get the ones place of the road I am on,” read the clue on the post.
The Facebook group has grown to more than 40 members, many of whom have posted photos of themselves at the tree. McCurdy said that there were several people who found it the first night it was selected.
“There were already about six people who found it on the first night. People have been asking if we are doing more trees before Christmas, but I think we are just doing the one this year. Next year we may added more trees. There are also other things that can be done with the community tree. My friend said that sometimes they do a donation to an organization after finding the tree and sometimes there are items left at the tree such as scarves and gloves. This being the first year of doing it I wanted to keep it simple and fun.”