Surveying begins for addition of third lane on Hwy. 54 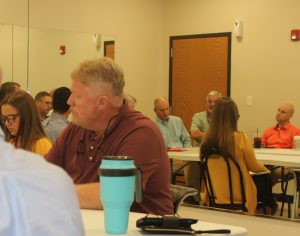 Pike and Audrain County officials met last Thursday at the Eastern Family YMCA in Vandalia for an update on the efforts to make Hwy 54 a three-lane highway from Mexico to Louisiana. Those present for the 54 Coalition meeting included representatives from MoDOT and first-time guests Tim Carter, mayor of Louisiana, and Jim Arico, mayor of Bowling Green. Presiding Commissioner of Audrain County, Alan Winders opened the meeting by welcoming the guests.
“Welcome to the Hwy 54 coalition meeting,” said Winders. “We are glad to have the mayors of Bowling Green and Louisiana with us today. I am going to let MoDOT give us an update on the latest news,” he added. Chris Knapp, transportation project manager for MoDOT, said that a news release had just gone out about surveying that has begun for the project. He introduced Bruce Green, of Bartlett & West, who is conducting the surveying.
“I have a history with this project going back years, so I have a vested interest in it,” said Green. “Our scope for this stage of the project, is conceptual and preliminary. We are not doing any hard plans or preparation for construction necessarily, but we are looking at what we can do to achieve the immediate goals of this project, which include a conceptual study to realize what the best layout would be for passing lanes on Hwy. 54. We are looking at safety issues, and how this added lane may affect intersections. We are also looking at environment impacts and utility impacts. The roadbed is not big enough to support the addition of a lane so we are also looking at widening that would need to be involved with construction,” he added.
Knapp said that the added lanes would not be within city limits and would likely be intermittent along Hwy 54. Original plans that were drawn by the coalition called for an addition of two lanes for Hwy. 54. The website states, “From Mexico to Louisiana, local residents and the traveling public need a better Hwy 54. A shared four-lane highway is being proposed by a group of concerned citizens to help this happen.” Over time, the revision called for only three lanes. Green said that the public will begin seeing surveyors out on the highway using various methods of surveying.
“We are getting started now and the surveying parties are going out and setting up targets. The contract involves surveying the entire corridor. We will be using multiple methods including light detection and ranging technology and drones. We are not only going to make conceptual recommendations but also cost estimates for the construction project. We will attempt to determine what the most logical layout projects would be for adding this new lane. I don’t know how familiar everyone is with three lane sections of highway, but there has been implementation of these by MoDOT that has been successful in Missouri, such as from Camdenton to Lebanon. It is definitely lower impact and a much lower cost than going with a four lane divided highway,” said Green.
Knapp said that MoDOT hopes to have a public meeting near the completion of the conceptual study in February or March of 2023 to discuss the project. The 54 Coalition has been meeting since 2009 on a monthly basis. Members have advocated for the widening of Hwy 54 and sought funding from state and federal grants for the future project. No funds have been granted to date for construction. The coalition will meet again on Thursday, Sept. 15, at the courthouse annex in Bowling Green.