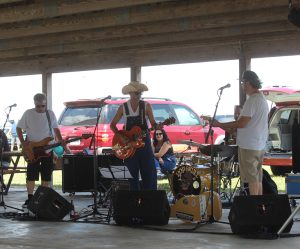 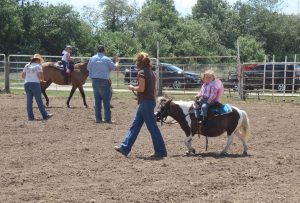 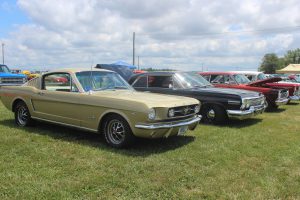 Crowds of spectators poured into the Vandalia Area Fairgrounds on Saturday for the Summer Palooza day of events. Beginning at 10 a.m., there was a lineup of classic cars for auto enthusiasts to take a close look at. Many of them had open hoods for visual inspection and several of the cars were late 1960s model Shelby Mustangs. Entertainment scheduled for the evening included the band PopSkull Rebels out of Kansas City, Mo. Front man K. A. Browning said that they have been doing a lot of shows this year.
“We have been busy. We just did a gig in Springfield with a venue of 5,000 people,” said Browning. “We have a friend from the St. Louis area that helped get us booked for this event here today. We play a rockabilly style rock and roll but we call it grit twang. It has elements of country, elements of rock and some blues in there, too. Some of our influences include Johnny Horton and the Clash. We self-produce our own records and have music available at Popskullrebels.com. Our name comes from an old civil war era term for cheap whiskey, which was called Popskull, or bathtub gin. We saw it in a museum etched on a little tin can,” he added.
At 1 p.m. The Tri-County Saddle Club conducted a horse show with multiple classes. First place winners included Piper Gorton for Open Halter, Troy Perkins for Ride-A-Buck Open Class, Quint Hinch, Amelia Pease, Blaire Gregory and Oakley Hopke for Lead Line 6 and under, Piper Gorton for JR Walk Trot, Maggie Portwood for Country Pleasure, Piper Gorton for JR Western Pleasure, Alyssa Massman for SR Western Pleasure, Piper Gorton for JR Egg and Spoon 13 years and under, Emma J. Meyer for Egg and Spoon 14 years and over, Troy Perkins and Alyssa Massman for Relay Race-Open, Troy Perkins for Flags-Open, Colton Lyons for JR Barrels 13 years and under, Tara Massman for SR Barrels 14 years and over, Maggie Portwood for JR Poles 13 and under, Tara Massman for SR Poles 14 years and over, and Troy Perkins for SR for Plug-Open.
Other activities included kids games, bounce houses, a Corn hole Tournament and a Mud Pig Catch. A list of vendors included Big Gun Kettle Corn, Sunday Afternoon Bakery, Color Street Nails, Paparazzi, Fidgets, Mom and Me creations and many others.