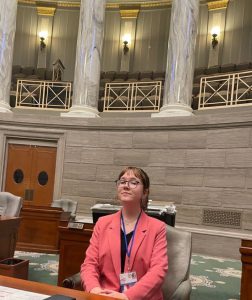 Vivian McFadden, who will be a senior at Van-Far High School this year, recently came back from a week of activities at Girl’s State. She had been selected as a candidate during the last quarter of the 2021-22 school year. She said that she had a really good time while she was there.
“I had a great time at Lindenwood University for Girls State,” said McFadden. “The first day that I was there was spent meeting people and going through orientation. Everything was very punctual and according to my schedule. Lights out was at 10:30 p.m. and everyone was in their room for the night. We would wake up at 6 a.m. and begin the day. The second day was introductory for different schools of instruction that we wanted to be involved with. There were numerous schools to choose from and I selected the one for legislative action,” she added.
The 80th session of Girl’s State took place on June 11-18, 2022, at Lindenwood University in St. Charles, Mo. During the week of Girl’s State, students experience a fast-paced, high-energy educational program designed to test their leadership, citizenship and scholastic abilities. Candidates compete with the best and brightest high school students in the state of Missouri. McFadden said that students learned a lot about the inner workings of government while she was there.
“There was an entire mock-government system that was in place. For example, if you wanted to become a Supreme Court judge you would have to go to law school, pass the bar exam and follow all the steps to reach that goal. I got to be a member of the House of Representatives. On Wednesday, we were able to take a trip to Jefferson City and tour the Capitol Building. After the tour, we held a mock session in the Senate chamber to pass laws. We also got to hear the governor speak to the group while we were there at the Capitol building.” she added.
McFadden received a check to cover her tuition cost from the Vandalia Area Chamber of Commerce last spring. She stated that students live on a floor (called a city) with approximately 30-40 other girls during their stay. She also added that she was able to make a lot of new friends over the course of the week-long event.
According to the Missouri Girl’s State website, the purpose of the program is to promote pride in America and to create a mythical state that the citizens will govern at the city, county and state level. Students become speakers who serve as leaders in Missouri government, as well as hold important offices in our communities. Girl’s State is a representative democracy. All its citizens may vote and are eligible to hold office. The government is operated “of, by, and for the people.” The goal of the program is to demonstrate the wide range of opportunities for participation in all phases of government.
It is an interactive citizen leadership program intended exclusively for the highest quality young women in the state. It is a simulated state, all sponsored, organized, and administered by the American Legion Auxiliary, Department of Missouri. A seven-day session is held annually in June on the campus of Lindenwood University. Approximately 100 staff members, many of whom are former Girl’s State citizens themselves, volunteer their time to conduct the annual session. Each city has a city counselor, who is under the direction of a county counselor and the dean of counselors.