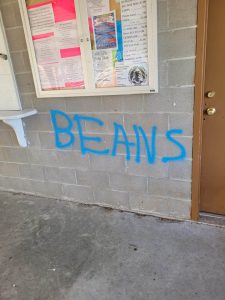 On or about Nov. 15, the Audrain County Sheriff’s Office took a report of property damage in Farber in which someone spray painted portions of the concession stand and portions of other structures in the city park. An effort was immediately made to track down those who were responsible for the vandalism. Farber Community Betterment posted that they were offering a reward on social media.
“Farber Community Betterment is giving a reward to information leading to the arrest of the artist who vandalized the Farber Sportsman Park and the Depot. Citizens have worked hard trying to make our ballpark and our town nice. Some pictures I cannot share due to them being inappropriate. Please Share and help us catch this person,” read the post.
The Audrain County Sheriff’s Department also put out a statement on Facebook regarding the vandalism.
“The Farber Community Betterment Association, through a partnership with Audrain County CrimeStoppers, is offering a $200 reward for information that leads to the identity and arrest of the person or persons responsible. Tips may be submitted anonymously by calling CrimeStoppers at 1-800-392-TIPS” read the post.
Last Friday, it was announced that the reward had been increased to $600 for information about the vandalism. Brandie Gay said that area residents were chipping in to increase the reward amount.
“The reward is up to $600 with locals chipping in to get this resolved,” said Gay. “I bought some products to see if I can get the paint removed,” she added.
Anyone with information can reach out to the Audrain County Sheriff’s Department, Crimestoppers, or the Farber Community Betterment Facebook page.