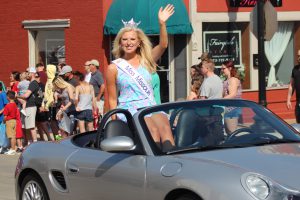 A big crowd packed the square in Mexico last Saturday as activities began for the annual Soybean Festival. Parents and children lined Monroe Street to wait for the parade to make its way past the courthouse at 10 a.m.
Leading the front of the parade was Cub Scout Pack 57 of Mexico. Directly following them was the Missouri Military Academy’s marching band. Other entries in the parade included several vehicles, walkers, and Miss Missouri, Clare Marie Kuebler, who waved at onlookers as she passed by in a convertible. A carnival with rides was available, along with game booths, and there were many vendors set up on side streets. One of the vendors said that they were there to help area children realize their dreams.
“We are with Dream Factory of Audrain County and Northeastern Missouri,” said Lisa Silver. “We grant dreams to critically and chronically ill children ages 3 to 18. We cover a large area reaching all the way to Louisiana, Mo., though we are a small group located here in Mexico. Today, we are here doing a fishpond to help get our name out there. We have been around for a while, and we have granted nearly 300 dreams for children in that time. Some of those dreams have included a trip to see the Dallas Cowboys play, we have done special hunting trips, shopping sprees, cruises and many trips to Disney World. We do a lot of fundraisers and we rely on donations to make these dreams come true. Anyone wanting to donate to the Dream Factory can reach out to us on our Facebook page,” she added.
Other activities during the festival included a corn hole tournament, live music by Cover to Cover, Mercury Son and Mad Hoss Jackson. There were also many food vendors and beer gardens open during both days of the event.