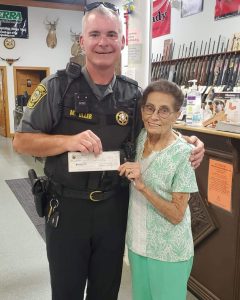 The Audrain County Sheriff’s Department received a big surprise during the first week of August. Sheriff Matt Oller was notified that Graf and Sons Reloading Supply and Gun Store, located in Mexico, were donating a check to the department in the amount of $10,000.
The company holds a golf tournament every year and donates the proceeds to various organizations. This year, it was given to the Audrain County Sheriff’s Department. Graf’s owner, Marj Graf, presented the check to Oller at the Graf and Sons location. Oller said that his department has a good use for the money.
“I was pleased to take delivery of a $10,000 check this week, which will be set aside for the purchase of our next police utility dog upon the retirement of K9 Chal or K9 Apollo.
“After some discussion with Chal’s handler, Sgt. Derek Chism, and Marj Graf, we have decided that his name will be Von Graf, which translated from German is ‘of’ or ‘from’ Graf. We’re happy to honor Marj for her part in keeping our K9 program running. Besides, it’s a good, solid German name that’s fitting of a German shepherd dog, assuming Chal retires first,” he added.
Graf & Sons, Inc. was founded in 1957 by Arnold Graf, his wife, Velma, their two sons, Bob and Howard and their spouses. Their company, which has become known as “The Reloading Authority” first started as a gasoline service station in Mexico that sold boats, motors, hunting and fishing merchandise. Later, they also added a go-cart track with the associated merchandise, small engine equipment and repair, motors, and motorcycles.
In the 1960s, the most important addition would be made, all thanks to the Missouri Department of Conservation’s promoted program to bring back more wild game. The significant increase of the deer and turkey population allowed the company to expand their hunting line to include more firearms and ammunition.
In addition to expanding the product line, the 1960s saw the start of the second largest trap shoot in Missouri. “The Graf & Sons Trap Shoot”, later changed to “The Paul Brooks Memorial Shoot,” was held in the Graf’s backyard, behind the homes Bob and Howard built in Mexico, Mo. The shoot was successful for many years, increasing to 300 participants. But, with the company’s growth in the phone and mail-order business, the time and manpower for the local shoot disappeared and the last shoot was held in 1988. Bob and Marjorie Graf became sole owners of the business after the passing of co-founder Arnold Graf in 1972 and the retirement of Howard Graf in 1981. Oller noted how essential Graf and Sons is to the community.
“Graf and Sons is a local business that employs over 50 people in our community,” Oller said. “For what it’s worth, I’ve never personally met an unhappy employee of Graf and Sons. Who are we kidding? Everyone knows Graf and Sons. Marj is the hardest working lady ever, and a person who truly cares for her community. Thanks to Marj and her ‘right-hand-lady,’ Sheila Fox, and all of Graf and Sons staff for their hard work and generosity,” he added.