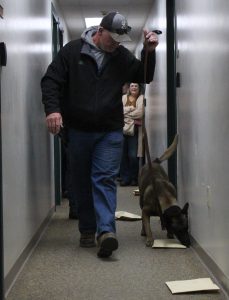 Last week Audrain County Sheriff Matt Oller gave a group of county officials and citizens an extensive tour of the Sheriff’s department and jail. Included in the tour was a K-9 demonstration, where K-9 Apollo was tasked with finding one of five envelopes that contained narcotics. Before the tour began, Oller discussed his background and role as sheriff.
“For those of you who do not know me, I am the sheriff though I am not in uniform tonight,” said Oller. “I run a grain truck in the fall and so that is what I was doing before the meeting today. I have been the sheriff for Audrain County since 2017 and have been with the sheriff’s office here since 2002. Prior to that I worked in Gasconade County, and I started my law enforcement career in my home county of St. Clair County, Ill. I started out working in a jail for approximately six months before I was moved to patrol. When my first child was on the way, I decided that this was not the place that I wanted to raise a child. So after the move to Missouri, I never looked back,” he added.
Oller lead the group through the building and started the tour in the bay where inmates arrive. Once inside, they are first thoroughly searched before being booked. Oller took the visitors through the booking area to see an impressive security tool that cost the department an approximate $200,000; an x-ray room that reveals whether or not a person has a weapon on their body. The group was shown cell blocks, an outdoor area for inmates, and the control rooms of the facility. Oller said that employees come in and are locked in for 12-hour shifts.
“When they get here, they stay locked in. We have 55 employees when fully staffed and we are one of the top 10 employers in the county. The original part of this building was built in 1997. Much like a hospital this is a hard used building, being open 24 hours a day and seven days a week. The jail takes the greatest amount of my time as the sheriff. It consumes over 50% of my total operating budget. The last time that I looked at the numbers, it was costing us $60.10 a day to house an inmate. That number factors in everything from fuel expense for transportation to electricity and water. When a jail is run and maintained properly, they are typically a very clean and sterile environment. I enjoy giving jail tours to our taxpayers for several reasons. The first reason is that you as taxpayers own the jail, and you are paying me to oversee it. The second reason is that it helps to dispel some of the false accusations that inmates make concerning the conditions of the facility,” said Oller.
After the tour had ended, K-9 Apollo was brought in to detect which envelope had narcotics in it. There were a total of five envelopes containing various items, such as a cookie and a pack of cigarettes. Apollo entered the room and almost immediately went to the envelope containing narcotics. Everyone was amazed at the skill which was displayed.