School board approves next phase of athletic complex 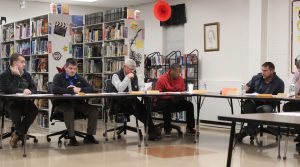 The Van-Far RI School District Board of Education met last Thursday in the high school library for a regular meeting. Action items on the agenda included a request for approval to begin the next phase of the new athletic complex. Superintendent John Fortney described the next steps to the board.

“As we come to a close of phase one, it is time to get started on phase two,” said Fortney. “This phase includes seating for the public, a press box, and a place to store all of the new track equipment that we have. We need to make sure that we utilize the aluminum that was saved from the decking of the old seating to mach the new seating. We estimated that the seating could accommodate approximately 605 people. The biggest reason for saving that old aluminum was that it was still in great shape. We will be looking at whether or not to use a stand alone press box or one that will be integrated into the bleachers.” he added.

The board voted unanimously to approve phase two of the athletic complex. It was announced that board filing opens on Dec. 6, at 8 a.m. and will close at 5 p.m. on Dec. 27. There will be three seats that are available on the school board and anyone who is interested may visit the central office during regular hours. Fortney also discussed the switch from SISK12 to Infinite Campus.

“SISK12 will no longer be offered here after the end of the year. We had to look around and figure out what we are going to do. We looked at two or three different options and the district has decided that we would like to go with Infinite Campus. A number of large school districts have been utilizing it. We have heard that it is very user friendly. It has its own Google Classroom that is built in. It has a school store function. We can offer spirit wear, kids can pay class dues, club dues, lunch accounts and all such transactions involved with the school. It also has a messenger set up where a teacher can send a text message to a parent and have immediate conversations. So it will increase our ability to communicate with parents. There is also a database management that is impressive as well. The cost will be around $17,000, which will be a cost savings by switching to Infinite Campus.” he added.

Fortney said that they will roll out the base for Infinite Campus in February and officially implement it for the 2023-24 school year. Pete Nasir discussed the possibility of open enrollment coming to Missouri schools.

“The Missouri School Board Association is pretty sure that open enrollment will be coming to Missouri,” said Nasir. “The MSBA has made a recommendation in support of what they would like to see for open enrollment. One of those things that they would like to see, is that students who wish to enroll in a non-resident district should do so no later than a certain date. Originally it was May 1. Another thing is that they want to see all local funding to remain with the resident district. They want school districts to determine whether or not they will accept students. Also, parents or the receiving school district will be responsible for the transportation of the students.” he added.

The meeting adjourned at approximately 8 p.m. and entered executive session.