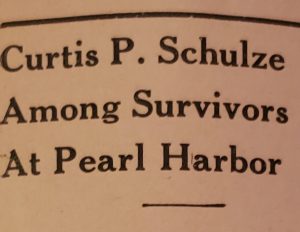 The attack on Pearl Harbor, which occurred 81 years ago, remains a day that will live in infamy, as President Roosevelt said in his Dec. 8, 1941 speech to Congress.
“Mr. Vice President, Mr. Speaker, Members of the Senate, and of the House of Representatives: Yesterday, December 7th, 1941—a date which will live in infamy—the United States of America was suddenly and deliberately attacked by naval and air forces of the Empire of Japan,” said Roosevelt.
The Vandalia Leader proclaimed a good report concerning a local service member who was stationed at Pearl Harbor. The following was printed in the Dec. 18, 1941 issue of the Vandalia Leader.
Washington D.C.—Navy Department advises Curtis P. Schulze, gunner mate second class on Downes Destroyer, listed among the survivors. The Downes, a destroyer, went down with the battleship Arizona, and many other ships in Pearl Harbor last Sunday a week ago. Young Schulze was known to have been at Pearl Harbor and when the ship on which he was a mate was sent to the bottom it became increasingly alarming in Vandalia of his fate.
That we might have an authentic report we contacted the Navy department at Washington, D. C. and received the good news above. That he is safe gives his parents and friends here considerable satisfaction and comfort. No doubt from the graphic report made by Secretary Knox of the cabinet who obtained his information by flying to Hawaii it was a thrill which young Schulze doubtless will remember and always cherish that which he experienced. From all indications he was as calm as he could be and never at any time did he waver in his duty in the thick of the fight but stood the test as a veteran. Just how near he came of being one of the casualties could not be ascertained from the meager report we obtained but we have every reason to believe he was at ease and enjoying the excitement which marks him as one of the survivors of this great surprise attack. To be thrown into a melee of this nature would doubtless make the blood of any patriotic American run just a bit faster and also screw up his courage to do and die for the eternal right. That he is safe gives us much consolation.
That Vandalia had an eyewitness to such a fete is another chapter that should be placed in the archives of the city and should be a subject for the D.A.R.’s and other patriotic organizations to discuss. Young Schulze was among the first of the Audrain contingents to enlist in the Navy and from the time he entered he has occupied a place which has been full of action and brought him within the zone of the first battle of the second world war and a place that will in time be as familiar and as prominent in American history as is Fort Sumter and John Paul Jones’ escapade, together with Admiral Dewey’s “You may fire when you get ready, Gridley” and sinking the “Maine.”
If the occasion should occur in another attempt to destroy the Navy we are sure young Schulze will be found at his post and though his ship has gone to the bottom he still will give an accounting of his courage in whatever circumstances that may arise. Schulze is a son of Mr. and Mrs. Lewis C. Schulze of this city. He was born here and educated in the Vandalia schools, graduating from the high school.
A proclamation made by President Roosevelt was also published in the Dec. 18, 1941 issue of the Vandalia Leader, in which he urged Americans to help support the American Red Cross. An excerpt from the proclamation is as follows:
“Whereas for more than 60 years the American National Red Cross has played a vital role in binding up wounds of the injured, in sheltering, feeding, and clothing the homeless, in succoring the distressed, in rebuilding broken lives, and in rehabilitating the victims of catastrophes of nature and of war, and whereas in preparation for just such an emergency as we are now facing, the American Red Cross has been spending funds at the rate of more than $1 million a month, which is but a small fraction of the amount that the organization now requires in order to carry out effectively its functions as an essential auxiliary of our armed forces, particularly as a friendly liason in welfare problems between the man in service and his family at home, and as a key agency in the civil-defense plans. Now, therefore, I, Franklin D. Roosevelt, President of the United States of America, and president of the American National red Cross, do hereby proclaim the beginning, as of this date, of a Red Cross War Fund campaign for the raising of a minimum sum of $50 million, and I appeal to the American people to make this campaign an overwhelming success.”