The annual Prairie Days on Saturday drew a big crowd for the day-long activities. At 10 a.m., vendors along State Street opened for business as people began to arrive and roam the various exhibits. At 11 a.m. the annual parade, led by Audrain County Sheriff Matt Oller, made its way down Main Street from South School Park. Once the procession made it past the four-way intersection, the parade stopped to observe the National Anthem, played by the Van-Far Chiefs Band. After the parade had ended, a special dedication was announced by Lori Culwell.
“Ladies and Gentlemen, at this time we would like to make a dedication to the new wall mural here on Main Street,” said Culwell. “The story behind the mural is that there was a box full of chamber memorabilia that was found. In the box, was a picture that Mr. Ben Salmon and his grandson had done in 1984. The chamber members agreed that they would like to see a mural done to represent Mr. Salmon and his family. Today, we are giving this framed picture to his daughter Connie,” she added.
Chamber member Ramsey Dickerman added that the chamber wanted to recognize Lori and her husband, Mike, for all their efforts in making the mural happen. Charla Smith, chamber chamber president, gave recognition to area firefighters.
“This represents the volunteer firefighters in the Vandalia community, the Farber community, and the Laddonia community,” said smith. “On behalf of the chamber of commerce we would like to say thank you for your countless hours of volunteer work that you do for us,” she added.
Each of the townships received a certificate of appreciation, and all the volunteers also received food vouchers to cover their meal for the day. At 1 p.m. the bounce houses opened, the horseshoe tournament began, and a scavenger hunt started at the Vandalia Area historical Society Museum. Joy and Rennie Davis, who were welcoming people into the museum, said that they had approximately 20 people participating in the scavenger hunt and bingo game that was taking place.
As the vendors began to close at about 3:45 p.m., a number of muscle cars made their way through the crowds to park along State Street for the car show. At 4 p.m., the Bubble Bus began blowing clouds of bubbles onto Main Street for the children. Blacktop Mojo, a rock band from Palestine, Texas, was just finishing up a sound check ahead of their performance scheduled for 8 p.m. Matt James, the lead vocalist, said that they just came in from a show in Oklahoma.
“We played in Tulsa last night,” said James. “We formed our band back in 2012 and we have been a full-time touring band since 2017. This is our last show that we are doing finishing up a tour that we have been on. We are an independent rock band from Palestine, Texas, and we have four albums out as of this year. Our last album was self-titled, and we were No. 3 on the iTunes chart for several weeks. We have had the biggest response from one of our cover songs that we did on YouTube. It was a cover of “Dream On” by Aerosmith. We also have a bluesy song titled “It Won’t Last” that has had more than 6 million views on YouTube. Our influences include a variety of rock bands, including Alice in Chains, Soundgarden, and southern rock bands like Lynyrd Skynyrd. And of course, being from Texas we also listened to Pantera growing up,” he added.
The general thought among chamber members was that it had been a good, if not better than usual crowd that attended the Prairie Days event this year. Several food vendors sold out of their products shortly after noon. Many of the vendor booths were crowded with patrons purchasing their goods all morning and afternoon. All in all, it was an obvious success to those who organized, participated, and visited Vandalia’s 2022 Prairie Days. 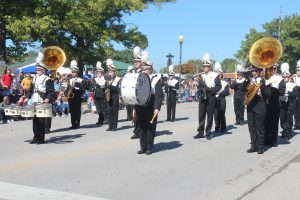