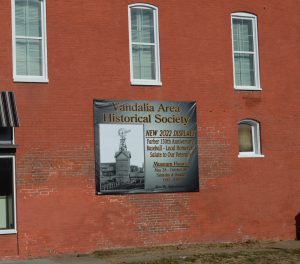 Members of the Vandalia Area Historical Society met Saturday morning to discuss plans for the 2024 Vandalia Sesquicentennial celebration. President Vicki Wright described the fundraising efforts that are underway, which will help cover the cost of the events that will take place during the celebration.
“We have the ‘$150 for the 150th’ fundraiser that we are accepting donations for,” said Wright. “We have already sold 10 of these to date. I do not know how many of these we will sell between now and 2024, so other means of fundraising are open for discussion,” she added.
Each donation for the ‘$150 for the 150th’ will be recognized on a 3 x 5 inch metal plate engraved with a memorandum of the donor’s choice. These plates will be placed on a plaque and be permanently displayed in the Vandalia Area Historical Society Museum. Wright also discussed the idea of a Vandalia citizen recognition display for the celebration.
“I had an idea to recognize prominent members of the community in the last 50 years during the celebration. There would be a brief history about each individual placed on a tri-fold display. Candidates for this recognition are open for suggestion. Ideally, these deceased individuals would be quickly recognized as people who made an impact on the community,” said Wright.
The celebration events, which will take place in the summer of 2024, will include a list of activities such as a parade with historical floats, a historical stage play, an era clothing contest, a beard contest, a walking home tour, a pie eating contest, an ice cream social, a dog and horse show and many others.
During the centennial celebration, which occurred in 1974, it was reported that guests and visitors had traveled from 32 states to take part in the 100-year anniversary celebration. According to the ‘Vandalia Area Centennial Record’, planning for the centennial event began three years before the anniversary.
“Work on the centennial observance commenced in 1971. At that time, the Vandalia Community Betterment, acting on a motion by Mrs. Walter Brinkman, took on the responsibility of organizing a celebration. After listening to a group from the Laddonia centennial report on its organizational procedures, the Community Betterment made its initial move. A nominating committee was appointed to slate a board of directors and make application for a not-for-profit corporation charter. The centennial headquarters was located at 206 North Main Street and served as the command post.