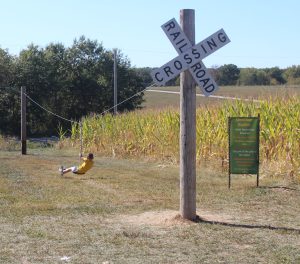 FRANKFORD—The Peno Creek Pumpkin Patch located in Frankford, Mo., opened for its fourth season on Sept. 24. Activities at the patch include a corn pit, hayrides, a corn maze, a playground area and barnyard exhibits, which occupies about 12 acres of the farm. Owners Curtis and Holly Delgman, have been working hard to add some new and exciting activities for visitors this year.
“This year we have added a zip-line to the list of activities,” said Curtis Delgman. We want to tie everything in with agriculture and use local themes. I was trying to come up with a name for the zip-line and decided to call it “The Short Line” because we are parallel to the Short Line rail. Ringling owned it for a long time moving the circus up and down. It also served for moving agricultural commodities. Frankford at one time also had a stockyard that was serviced by it. So, this is a great opportunity to represent Frankford’s history. We have a railroad crossing sign next to it and we are going to add more signage soon. There may also be another activity added for children, as I am going to be looking at picking up some new equipment,” he added.
Delgman said that they had a good opening weekend, though Saturday was a little slow, likely because of all the activities going on in other areas. A lot of pumpkins were situated near the entrance this year. Delgman said that they had been cutting a lot of them and bringing them up from the patch to help deter the deer from eating them.
“Production was all right this year, but deer pressure was out of control,” said Delgman. “We have hauled off many truckloads of pumpkins that had deer damage so far this year. We are seeing pumpkins with one or two bites out of them all over the patch. The deer have plenty of beans and corn to eat here, but they are getting a taste of the pumpkins, too. The ground was hard for planting this year due to the dry weather. I was able to plant late after a good rain in July. Despite the challenges this year, we should have plenty of pumpkins to last the season,” he added.
Food items available at the pumpkin patch this year include burgers made from beef that was raised on the Delgman farm. Another addition this year will be a haunted corn maze.
“We’re going to do a haunted maze sometime in October. We didn’t want to start doing it too soon, so we are waiting a little closer to Halloween. We also purchased an outdoor movie projector for playing a Halloween movie, but we are hitting road bumps trying to get (electricity) run for it. It is a 20-foot screen that will be placed on the outside deck area if we get it to work out,” said Delgman.
The last day of the season will be on Oct. 30 this year. The site is available for group bookings and it also has a party pavilion rental. The Peno Creek Pumpkin Patch is located at 8060 Old Hwy 61, Frankford, Mo. They are open on Saturdays and Sundays from 10 a.m. to 5 p.m.