New tanning center and restaurant to open on Main Street 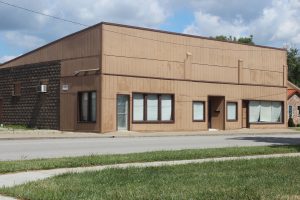 Owners of the Up in Smoke Food Shack have announced plans to open a tanning center and restaurant at 304 S. Main Street. After purchasing the property, owners Ronnie Woods and Rhiannion Wilkerson said that the building is being renovated.
“The tanning salon is the primary focus right now,” said Wilkerson. “The building is being completely renovated and the tanning area is currently under construction. When we started the project, we had the entire place gutted so that we could start from scratch. We are projecting that the salon will be open in approximately 60 to 90 days from now. The restaurant will take much longer to complete and it will likely be after the first of the year before we can open it,” she added.
The Up in Smoke Food Shack has kept the owners busy for several years now. Woods said that they will keep their routine of serving the public in many different locations around Audrain and Pike Counties.
“On Fridays we are set up at the lot next to Dairy Queen from 11 a.m. to 1 p.m.,” said Woods. “We are at the brick plant once a week and open to the public, we set up at the women’s prison and the Bowling Green prison. We serve Speed Commerce in Louisiana, True Manufacturing in Bowling Green and several other businesses in the area. We also do a lot of events like the Montgomery County Fair and Farber Fun Days. We like to keep busy. I am also the owner of a bail bond business and have several rental properties that I maintain. Our original plan was to build on the highway next to the Dairy Queen, but we decided to go with the downtown location on Main Street. The restaurant will be named the Up in Smoke Eatery and will be decorated with nostalgic themes throughout the dining room. It will be initially open on Fridays and Saturdays and perhaps a few other days of the week. We will be serving prime rib, baby back ribs, pork steaks, adult milk shakes and specials each week,” he added.
Customers looking for a good location to tan in the Vandalia area will find that the salon will be conveniently located near the YMCA. Wilkerson said that they would have unique features for members that will create easy access for any schedule.
“I don’t have the name of the salon yet, but I have all the details about the operation,” said Wilkerson. “It will be a 24-hour tanning salon that can be accessed by members who have a code to get in and tan whenever they want. Members will be expected to clean the beds before and after they use them. When the member enters the building, the lights will come on in the facility and the door will lock behind them for safety. There will be four beds for members to choose from and there will be different themes in the rooms,” she added.
The business owners said they met while racing and have changed course a few times on the direction of the business. They upgraded to a new truck last year, as well. They expressed that they are eager to see the downtown area revitalized and are excited to see new businesses such as Valencia’s Mexican restaurant coming to town.
For more information about the Up in Smoke Food Shack, you can follow them on their Facebook page.