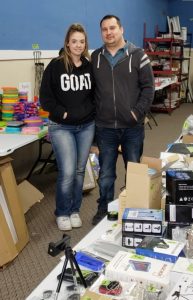 Patrons browsed through a variety of products and merchandise on a Thursday afternoon, as owners of the new ‘This and That’ store manned the cash register and bagged items. Having conducted a soft open near the end of 2021, owners Roger and Geordie Preston have not yet set a date for an official grand opening. Even though they are still waiting on the arrival of their business sign, they have done well in drawing people into the store.
“We have been opening the doors and putting out flags to draw customers in,” said Roger Preston. “Business was slow when we first opened, but it has since started to pick up. We see most of our traffic on the weekends. The products that we offer are mostly liquidation items. We decided that instead of doing bin sales, we would display all of our products on tables, so that consumers can see exactly what they are getting,” he added.
The appropriately named “This and That” store, seems to have something for everyone. There is a variety of goods including snack foods, housewares, crafts, toys, electronics, jewelry, clothes and incense. The owners stated that they may even be open to offering consignment in the future.
“We have considered doing table rentals for commission, but we aren’t certain about it yet,” said Roger Preston. “We have several display cases that we may consider renting out on a monthly basis for dealers looking to sell coins or other similar items. We would probably charge $60 for the display cases and $100 for tables,” he added.
The Prestons keep a full plate as they operate multiple local businesses, work full time jobs, and raise 10 children. Though Roger works out of town, living in Vandalia is convenient for them. They are within minutes of their business locations, which are operated within the same building.
“I also own and operate Jump-A-Roo’s Bounce House Rentals LLC, said Geordie Preston. “Jump-A-Roo’s is located on the back side of the building. Business is going well, and we are getting ready for the busy season as spring approaches. The “This and That” store is going over fairly well in the community, as there aren’t any like it here. There had been similar stores in the past that I enjoyed shopping at, but closed down for various reasons,” she added.
According to Geordie Preston, some of the best selling items include a variety of crafts, gadgets and outdoor products. They have also stated that inventory changes rapidly. According to online reviews, customers seem to be happy with the shopping experience. One of numerous five-star reviews expressed that the customer “Really enjoyed the friendliness and wide variety of items in this new little store. I will be back.” While another stated that they gave the store a “Thumbs up.”
“This and That” store is Located at 113 E State Street in Vandalia. They are also available on Facebook.