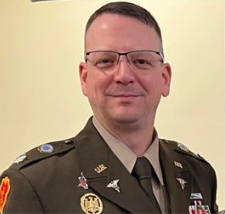 Maj. Michael Ahrens, son of Neil and Lois Ahrens of Martinsburg, was pinned lieutenant colonel in Frederick, Md., on Nov. 18, 2022. Ahrens first enlisted as an infantryman in 1998, and he later conducted search and recovery efforts inside the Pentagon following the terrorist attacks on Sept. 11, 2001.
After completing his enlisted tour and his bachelor’s degree, Ahrens was commissioned as a medical service corps officer in 2005. He has deployed to Iraq as part of Operation Iraqi Freedom, to Kuwait, Jordan, Iraq, and Qatar as part of Operation Inherent Resolve, and to Somalia, Gabon, Djibouti, Kenya, Ethiopia, and Uganda as part of Operation Spartan Shield. His mother, Lois, said that she is proud of him.
“We are very proud of all he has accomplished in his years with the Army,” said Lois Ahrens. “Michael grew up in Martinsburg where his father and I still live today. Because of the type of work he does we cannot disclose his current location. His job is with an intelligence unit and locations are never released. He is not permitted to wear any GPS devices or use a cell phone on post or at work with his position,” she added.
LTC Ahrens has been married to his wife, Visa, for over 21 years and they have 2 boys, Sebastian and Dylan, who are 13 and 11. Lois added that Ahrens’ promotion is not only based on performance, but also on a soldier’s potential for additional responsibilities within the military.
According to Military-ranks.org, A lieutenant colonel is the second field officer grade commissioned officer rank. A lieutenant colonel generally serves as a battalion commander of a battalion consisting of 300 to 1,000 soldiers. As a battalion commander, lieutenant colonels are assisted by one or more majors, many junior non-commissioned officers, and a command sergeant major as principal enlisted advisor. A lieutenant colonel may also serve as an executive officer or staff officer in a variety of high-level units or command posts.
It will usually take an officer between 16 and 22 years to rise to the rank of lieutenant colonel. As a result, many officers who are eligible to retire after 20 years of active service, retire with the rank of lieutenant colonel.