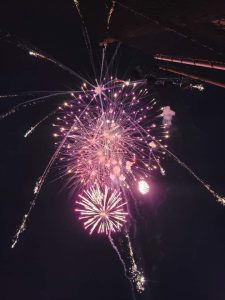 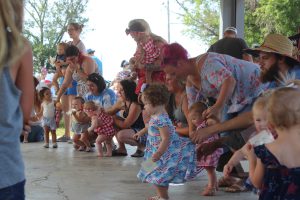 The Laddonia Missouri Athletics Association hosted the 70th Annual Fourth of July Celebration at the Laddonia Ball Field on Monday July, 4. The event started off with a baby contest that had a crowd of contestants lined up, at the same time that a softball game was being played.
A panel of judges watched as numerous categories of children were divided into different age groups for judging. Tanner Mcdonald, who was the announcer for the contest, asked several of the contestants in the older age group what their favorite color was, but most were too shy to answer. Jeremy Fendrick, LMAA president, said that the baby show draws a big crowd every year.
“It’s a big deal here in Laddonia,” said Fendrick. “A lot of people like to come and see the baby show. We have a parade lined up that will start at 11 a.m. The Laddonia Fire Department is putting on the firework show here at the ballfield just after dusk. We have people come from all over to watch the display every year. Even some from out of state,” he added.
There were a variety of vendors selling food and beverages. There were bounce houses, a corn trailer and a dunk tank on the grounds. Later in the afternoon there was a horseshoe and washer tournament scheduled.