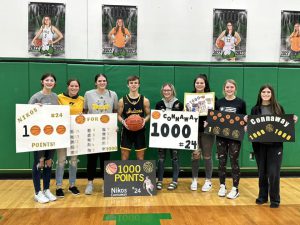 The Van-Far Indians scored two victories last weekend as they traveled to Silex and Paris. On Friday night, they defeated the Silex owls with a final score of 75-45. On Saturday, they beat the Paris Coyotes with a final score of 59-33.
“Friday at Silex we had a huge second quarter outscoring them 29-8 to take a 42-19 lead into the locker room,” said Coach Pat Connaway. “In the 2nd quarter Nikos got fouled and Silex got a technical foul which put him on the line for four FTs. He calmly made all four and the fourth one was his 1,000th point of his high school career. I called a time out so his teammates, the girls basketball team, family, friends, and fans could recognize him. After the timeout Nikos found Gage Gibson open on the wing and Gage hit a 3 that made the total trip a seven-point possession and we never looked back from that point. Saturday morning, we struggled to get going vs. Paris. It was tied 12-12 at the end of the first quarter and then our defensive pressure and intensity really took its toll. It was very similar to the second quarter against Silex. Today we outscored Paris 26-5 and took a 38-17 lead into the locker room. Gage hit 5 three pointers in the first half and six for the game. He led us in scoring with 18 and was the MVP of the game. Nikos had 14 and eight assists, while Cody Smith had 10 and Brayden Lay had nine followed by Evan Utterback with seven. This win evened up our record at 4-4.

With last night’s war with North Shelby, back-to-back games were not ideal,” said Coach Bob Curtis. “We were a little flat early in the contest as I think we were banged up from Monday night. We did not shoot it well but recorded 52 rebounds in the contest. Energy and effort on the glass was the reason we won. Kylie Brooks had the answer every time Sturgeon made a run. She finished with a double-double 16 points. and 15 rebounds in the contest. She was dominant in the paint all night. Olivia Kuda also had a solid night with nine points. And eight rebounds. just short of a double-double. With the lead late in the 4th the girls really showed how they can take care of the ball making the other team foul and running some clock. Sturgeon has some good young talent, and their guards are very athletic. Look for them to double their win total this year.” he added.