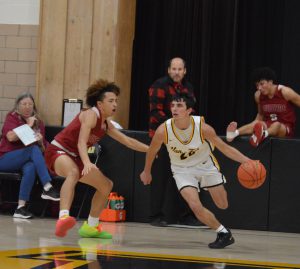 The Lady Indians played a good game against the Lady Bulldogs last week but lost the game with a final score of 54-33. In the boys varsity game, Indians No. 20 Gage Gibson scored the first points of the game. After keeping a close score through much of the game, the Indians won with a final shot in the last six seconds of the game, thanks to a foul called against the Bulldogs.The score was 45-44.

It was a hard fought battle between two teams that were equally prepared for one another,” said Coach Pat Connaway. “I definitely think it is a game we wouldn’t have won last year. Our maturity level is much better this year and hopefully a win like this will help us continue to grow, learn, and get better. The victory improves us to 2-1 and 1-0 in the EMO. Now we have the task of playing the #2 ranked team in Class 2A in the 1st round of the Centralia Tournament. Salisbury is a very good team with an ALL-State player. It will be a good test to see where we are.” he added.
The Indians began to prepare for the upcoming tournaments this week.

“Tuesday night eight different lady Trojans scored,” said Coach Bob Curtis. “Senior standout Sarah Angel led all scorers with 19 points. She had five steals as well that led to run out lay-ups. Our pressure led to some easy buckets in transition. Defensively we were very stingy in the second half as we took a 28-1 lead into the break. Junior Kylie Brooks had four steals and nine points. I thought we worked really hard and committed only five fouls in the first half. In practice we have spent a lot of time on speeding the ball up without fouling and giving teams a breather by fouling. We kept the heat on with no stops in play. This team gets better with every practice. I am excited to see what we will look like in February,” he added.
The final score was 56-12. The Trojans fell to Marion County with a final score of 63-42.