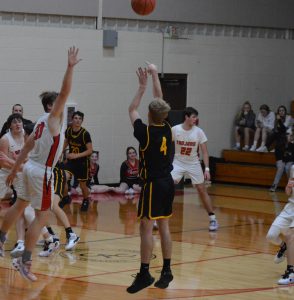 The Van-Far Indians traveled to Moberly last Friday night to seal another victory for the season. It was the last game of 2022.
“After a sluggish start we finally got some offense going,” said Coach Pat Connaway. “Early on we let their physicality bother us and Moberly jumped out to an 8 – 4 lead. We tied the game at eight at the end of the first, then our defense really took over. We held them to three points in the second and Nikos had nine of his game high 16 in the second including two free throws with 6 seconds left on the clock and we took a 20 – 11 lead into the locker room.
“We talked about how the first four minutes of the third quarter would decide the game and we jumped out fast after giving up a transition bucket and increased our lead to 38 – 20 at the end of the third. In the third, Pacey hit two big 3 pointers and scored eight of his 10 points in the third. We showed a glimpse of our prior championship team where we used to be able to run the clock and get a bucket at the end of a quarter to really break the confidence of our opponent. We killed the last 55 seconds of the third quarter and scored with 2 seconds left and we took a lot of momentum into the fourth.
“In the fourth, we continued to milk the clock and limit Moberly’s touches and our five freshmen finished out the final 2 minutes of the game (we won the quarter 7 – 2 by limiting possessions) and we cruised to a 45 – 22 victory over 4A Moberly. I’m very proud of the kids. It was a total team effort and a team win.
“It was a nice win to end 2022 and improve our record to 6 – 4. I think this will be a huge confidence boost beating a larger school like Moberly and doing so with an outstanding defensive effort. Our defense has averaged giving up 34 points a game over the four-game winning streak. Defense is our key and if we keep defending, we will be a solid ball club and be really competitive the rest of the year,” he added.