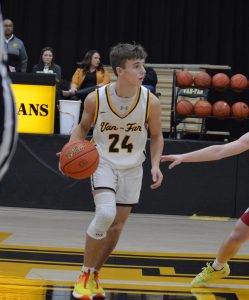 The Indians played against the Salisbury Panthers in the first round of the Centralia Tournament last week. Despite good effort the Indians took the loss with a final score of 58-52. On Thursday night, they fell to Hallsville by only one point. The final score was 64-63.

The Trojans won their game against Madison with a score of 57 – 22. The Lady Trojans also won in Madison, with a final score was 53 – 11.

“Good to win our first conference game of the year,” said Coach Bob Curtis. “Madison hosted for districts, so it was good to play well in their gym. Managed to get all 15 girls some action with eight scoring in the contest. Great first quarter lead to us being able to work on some different defensive and offensive schemes during the second half. Next contest is Slater at home on Friday and North Shelby on Monday,” he added.

On Friday, the Lady Trojans defeated Slater with a score of 53 – 34.

“Slater fought hard for their new head coach,” said Curtis. “Coach Harding has the Lady Wildcats working very hard early in the season. Every time we tried to pull away, they would put a run together. Olivia had a great game on the glass coming close to a double double. Alyssa provided the long-range shooting hitting 3 three’s and finishing with 13. Sarah took a lot of half court pressure and handled it very well. She was composed and did not turn the ball over. Chipping in 10 and directing our offense. With Aaliyah Welch out with an illness we got into some foul trouble and needed freshman Jocelyn Curtis to step up and guard their size inside. She helped give our starters get a breather and kept them off the boards. Brooklyn and Kayla helped out defensively wearing their athletic guards down and freshman Peyton Beamer helped handle the ball. Next contest is Monday,” he added.