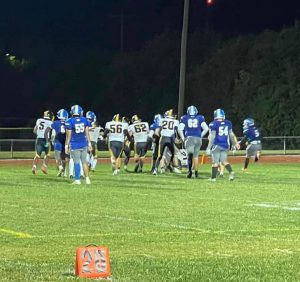 The Van-Far Indians played the Wright City Wildcats last Friday despite the wet, cold weather. Head coach Lucas Gibson said that it was a tough loss for the Indians.
“Super tough loss, but I am beyond proud of the kids for battling back,” said Gibson. “The Wildcats scored off their first two drives, but on the third drive, Gage Gibson intercepted a pass and carried it for 16 yards before being stopped. Nikos Connaway had a 41-yard run, followed by Eoff with 13 yards to put the Indians on the board. Nikos Connaway ran in the 2-point conversion, making the score Wright City 13, Van-Far 8. On the kickoff by Brandon Eoff, he recovered the ball after a Wright City player attempted to and failed to maintain control. The Indians took over at the 42-yard line, but Nikos Connaway fumbled it and Wright City took over and scored again. The defense continued to maintain focus and Tyrece Cole got his second tackle for loss, forcing the Wildcats to punt. With under 9 minutes to go, the Indians worked to maintain control of the clock, but they were unable to convert. Nikos Connaway sent a 28-yard punt to the other end, but the Wildcats scored on their first drive, taking the lead, 34 to 28,” he added.
The Wildcats won with a final score of 41-28. The Indians face North Callaway next week.