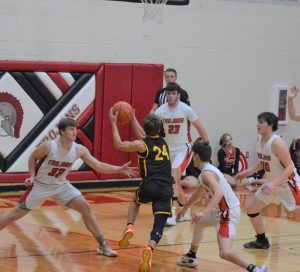 The Van-Far Indians traveled to Community R-VI last week to play the Trojans in the last game ahead of the Christmas break. The varsity boys played a competitive game with the Indians and Trojans keeping a close score throughout the first and second half of the game. The Indians won, with a final score of 41-37.
“Nikos led us with 16 points and had seven steals,” said coach Pat Connaway. “Brayden Lay had seven and Cody Smith had six. We made five out of six free throws down the stretch and forced some key turnovers in the final minutes of the game,” he added.
The Lady Indians also played a competitive game against the Lady Trojans but fell to the Lady Trojans with a final score of 59-36.
“Offensively we got great production out of everyone,” said coach Bob Curtis. “It was very refreshing to hit five threes in the contest and go six to eight from the free-throw line. We have not been shooting it real well and to have 10 people score and play well was really exciting going into the Christmas break. Olivia Kuda took a charge in the first half despite being about 75 percent from her ankle injury on Saturday against North Callaway. I knew our toughness and effort was going to be there after the team saw that kind of heart. Freshman Peyton Beamer and Freshman Jocelyn Curtis scored 12 combined to give a spark off the bench and playing really well. We kept fresh bodies on the court and kept the tempo up the entire contest. Our next game will be Jan. 2, at the New Franklin Tournament,”