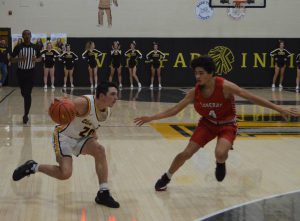 The Van-Far Indians battled the Elsberry Indians on Tuesday evening. The Junior Varsity Indians beat Elsberry by three points. Final score was 18-15. In the girls varsity game, Elsberry took a strong lead after the second quarter. The Lady Indians never caught up to Elsberry. In the boys varsity game, Van-Far Indians No. 35 Carter Jennings scored the first shot of the game. In a fierce competition, the score at halftime was 23-22, with Elsberry in the lead. During the second quarter, both teams kept the score tied until the last moments of the game. With only five seconds left on the clock, the Elsberry Indians scored a final shot, ending the game with a score of 50-49. The Indians will play at Bowling Green on Friday night.