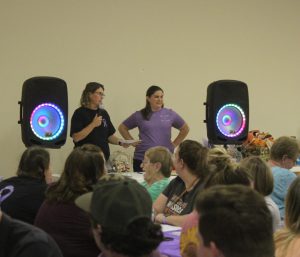 Friends, family, and co-workers of Joanna Borgmeyer were joined by members of the community at the Sacred Heart church Saturday night to honor her memory. The doors opened at 6 p.m. at the church hall with a variety of food and drinks available, including, loaded nachos, hot dogs, homemade desserts and soft drinks. As the first Lucky game was about to begin at 7 p.m., Dana Keller said a few words about Borgmeyer.
“Joanna was a kindhearted person who always put her girls first,” said Keller. “The two girls were her world. Jayda, which was her oldest and her rock, and Jaxdyn was her youngest and her baby. Joanna and Jaxdyn were inseparable. Tonight is all about celebrating Joanna who loved to play bingo with her girls, her friends, and her family. Even though Joanna was a private person, she would be so excited with the overwhelming support that this community along with her friends and family have shown her girls,” she added.
As approximately 200 people began to play the game, last minute participants funneled in to view the many silent auction items that were spread across multiple tables. Items included coffee and snack baskets, handcrafted signs, a handmade quilt, gift cards, and a Van-Far fan basket, which included items with the Van-Far Indians logo and a one-year family athletic season pass for the 2022-23 school year. Brandie Gay, who organized the event, said that all the proceeds would go to Joanna’s daughters.
“The funds that are generated will go to Joanna’s girls,” said Gay. “Jayda is getting ready to move back to Farber from Columbia to help take care of her little sister. She had just recently graduated college. Joanna was working for the city of Vandalia for about three years. She grew up in Mexico and was a resident of Farber. She was a quiet and private person. A lot of people knew her from when she was working as a waitress in the area. I knew her for more than 20 years. We had just celebrated her 46th birthday here at City Hall. She was working on building a new house, which is supposed to be finished in October. Her daughters may be coming to live in it when it is completed,” she added.
Borgmeyer, who had taken the position of finance officer for Vandalia earlier this year, had been diagnosed with stage 4 pancreatic cancer only three weeks before she died, according to Gay. After the event was over, Gay said that the donations were beyond expectation in an update she posted on Facebook.
“I am speechless with the outpouring of support that our community gave. With the donations, offering to help and the crowd that gathered for an amazing woman that left us far too soon. My heart is so full. Thank you to everyone that showed up and participated in the events,” said Gay.