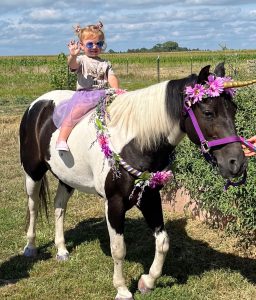 Brady and Tessa Chasteen, who began offering equestrian lessons last February, and selling feed in June at their property just outside of Vandalia, suffered the loss of three of their horses during Christmas Eve and Christmas Day.
One of the three horses was a pony, belonging to the Chasteen’s daughter, Audrey. As a result of the sudden deaths, they were forced to discontinue riding lessons, which they had been giving to customers. Brady said that they were not sure what the cause was for the sudden illness and that they are waiting on test results to come back for answers.
“We loaded the three horses into the trailer and took them to the university (of Missouri) for testing,” said Brady. “It can take as many as several weeks for the test results to come back. We do not know what the cause was, but our best guess would be an environmental toxin. There is nothing classically presented about any one toxin though. We are having everything tested. The hay, the feed, the water, and even the dirt. We have two other horses that have presented no symptoms of being ill, and they were using the same feed, hay and water as the horses that were sick. They are perfectly healthy. We have had a lot of people reach out to us who also own horses, and no one has had a similar experience. It is a mystery and a shame that our little girl lost her pony on Christmas,” he added.
Of the three horses that were lost, one was about 25 years old, the other was about 20, and the pony was 14. After the unfortunate incident was announced, a Go Fund Me page was created to help offset the cost of veterinary bills and to help with the purchase of a new pony for Audrey. The fundraiser had an immediate response from many donors who felt compelled to help. On the page, Tessa explained that the horses were important members of the family.
“We were only able to save the two youngest horses in the barn. All three horses we lost were important members of our family, but my daughter’s pony was a once in a lifetime combination of sweet, kind, forgiving and trustworthy that is difficult to find in a pony. Riding him was the highlight of her day, and she rarely missed an opportunity to be on or around him,” said Tessa.
Tessa also explained that any funds that are donated above the cost of a new pony, would be applied to a growing veterinary bill that covered the three horses that died. Brady said that the cost to replace all three horses would be expensive.
“If we were to replace all three of them, it would be around $25,000, and closer to $30,000 to cover all the veterinary bills that we have incurred. As a result of the loss, we have also had to suspend riding lessons, which generated income. We really hope to be able to get another pony for Audrey because it’s pretty tough for a little girl to lose her pony on Christmas. She is doing all right as far as we can tell but I know she must really miss her pony,” he added.
For more information or to make a donation, you may visit the Go Fund Me page—‘Help Audrey find a new pony.’ You may also make a direct donation to the Chasteens by contacting the Vandalia Leader at 573-324-2222, or stopping by the office located at 108 W. State Street.