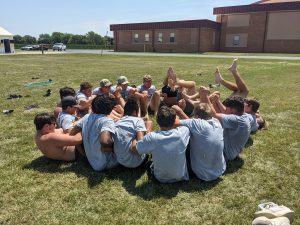 The Van-Far Indians spent last week getting ready for the upcoming season during football camp. Coach Lucas Gibson said that they are doing pretty good, despite having low numbers.
“They are doing well, and they are a great group of kids,” said Gibson. “We are low in numbers, but we have quality over quantity. We are looking forward to playing on the new field and hoping that it will be finished in time for the first game,” he added.
On Friday, the last day of football camp, team members were dispersed after practice into four different groups. The groups went into Vandalia to offer community service to businesses and residents. One group went to County Market to pick up debris in the parking lot, another group spent time on State Street pulling weeds from the sidewalk outside of businesses and also did some work at the Eastern Missouri Family YMCA. After the work in the community was finished, everyone met back at the school to have barbecued hamburgers and hot dogs for lunch.
“We had a good week for football camp,” said Gage Gibson. “Today we were able to go out into the community and help clean up some different areas. We went to South School Park and removed some rocks and other debris that were creating a hazard on the field,” he added.
After lunch, the athletes spent an hour of team building outside with various activities. Numerous local businesses and individuals took to social media to praise and applaud the efforts that the team displayed around Vandalia.