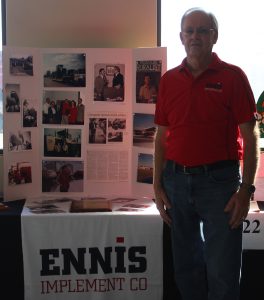 To show their appreciation to customers, Ennis Implement hosted a pancake and sausage lunch on Wednesday, Nov. 2, at their Vandalia location at 1117 S Main Street. Owner Phillip Ennis said that there was a good turnout for the event.
“It was a good turnout. I believe we had about 150 people come out today,” said Ennis. “There were about eight of us who helped set up and serve food from 11 a.m. to 1 p.m. As we celebrate 75 years in business, we wanted to show our customers our appreciation.”
In March of 1947, James H. Ennis and his sons, Leon and Fowler, met with International Harvester Management at the Statler Hotel in St. Louis and finalized arrangements to become the dealer in Vandalia. James H. and Leon moved to Vandalia in April and started training to prepare for the new business. James H. retired in July of 1960 and lived in retirement in Vandalia until his death in 1970. Leon and Fowler continued as partners until December 1978, when Leon retired. Fowler’s son Phillip Ennis became a partner Jan. 1, 1979, and moved his family back home in June of that year. A building program was started in 1979 and the present facility was ready to occupy in the spring of 1980. In August 2005, Phil’s daughter and son-in-law, Amy and Kurt Childs, moved their family home and became part of the operation. Fowler retired from the day-to-day operation in September 2005.
“We have locations in Troy and Mexico, Mo., also,” said Ennis. We now have four generations involved with the company and business has been good.”
According to their website, many new product lines have been added over the years. Nationally recognized lines such as Cub Cadet lawn and garden equipment, Land Pride field and lawn equipment, Grasshopper mowers, Great Plains and others. In 1982, the company was chosen by Steiger Tractor as the dealer for this area. The first Steiger tractor, a PTA 310 (310 hp) was sold to Norad Enterprises. With the merger of J.I. Case and International Harvester, the partnership became a Case International dealer in February 1985.
A statement found on the Ennis Implement website expresses their thankfulness to their customers and community.
“The company has been blessed with good employees, good customers, and the good will of a fine agricultural community. Under such conditions, our history is off to a wonderful start and Ennis Implement looks forward to writing the next chapters with you.”