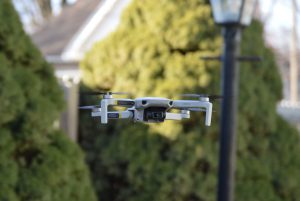 As drones become more popular in both recreational and commercial uses, pilots are increasingly launching their small, unmanned crafts into public airspace. Residents in the Vandalia area have recently taken to social media to inquire about the drones they have been seeing in the sky around town.
One individual, Maurice Davis, responded on a Facebook group post to identify himself as one of the local drone operators. He assured those in the group that he was flying in a safe manner and according to federal regulations. He also shared some panoramic views of a sunrise over Vandalia that the group appreciated.
“I have taken some nice aerial photos over the city of Vandalia,” said Davis. “I haven’t done much with video yet though. I started flying my Mavic 2 drone in 2020. During the pandemic, everyone was trying to keep to themselves, so it seemed like an ideal hobby to pick up. I bought it and quickly fell in love with it,” he added.
According to the Federal Aviation Administration, there is a lengthy list of rules that come with the purchase and use of an unmanned aircraft system. First of all, you must register the drone before using it. As stated on FAA.gov., “All drones over .55 pounds must be registered with the FAA before flight. Law enforcement and public safety officials may ask drone operators for registration documentation.”
The FAA lists a separate set of rules for flying a drone for recreational purposes and for commercial purposes. To fly a drone commercially, (any use for financial compensation) the pilot must pay a $175 fee and take the part 107 test with an authorized FAA flight instructor. There is an extensive online library of study materials pertaining to the test. Such examples for commercial use include shooting video for real estate sales, photography for journalism, sales, roof inspections, sporting events and many other uses. Davis said that he plans to complete his studies for the test to become a licensed drone pilot.
“I am going to try to study and take the test by next summer. In 2019, I received my cosmetology license and I am planning on getting a barber’s license. If I open my own barbershop in the future, I will use the drone to take photos of the location for promotional purposes. Right now I just enjoy using it for recreational reasons. I know of a few other drone operators in the Vandalia area also. This technology really is great for many uses and is becoming more popular for various reasons,” said Davis.
While the requirements for commercial pilots may seem intimidating, there are plenty of hoops to jump through for recreation use as well. The law requires that all recreational pilots pass an aeronautical knowledge and safety test and provide proof of passage if asked by law enforcement or FAA personnel. Recreational pilots must also use an app to check airspace for a ‘clear to take off’ confirmation prior to each flight. Examples of recreational flight include flying for personal enjoyment, and taking photos and videos for personal use only.
Some of the rules of recreational flight include a flying height limit of 400 feet, keeping your drone in sight at all times, steering clear of restricted airspace, and not flying over groups of people or near other aircraft. A few advantages of the commercial part 107 license are it allows the pilot to obtain permission for night flight and in special circumstances, operating a drone from a moving vehicle.
One local example of commercial drone use is the surveying project on U.S. Hwy. 54 from Mexico to Louisiana. As surveying crews began the project last fall, MoDOT advised citizens that the use of drones would be one of multiple methods used during the job.
For someone who is considering a hobby that would take them to new heights, a well reviewed drone shooting stunning 4K images can be found on the market for around $600 today.