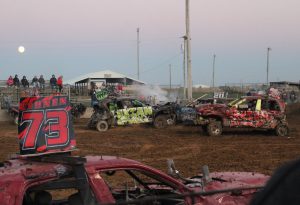 It was the last big event of the year for the Vandalia Area Fairgrounds.
Presented by J&B Promotions, the fairgrounds hosted a “Clean-Up Show” demolition derby.
Although there was a chill in the air, the bleachers were packed with enthusiastic spectators who came out for the action. Just before the derby started, Head Tech Paul Smith, went over some rules and updates for the drivers.
“This is a clean up show, so we want to have nothing left running at the end,” said Smith.
“Next year, we are making some changes. We are going to split the minivans from the cars in Gut and Go. The minivans and small trucks will be in their own class. A four point cage will also be required fro drivers to have in this class,” he added.
After the cars lined up for the compact class, announcer Tim Boggs described the schedule.
Here is how this is going to go tonight,” said Boggs. “We are going to do one and done, it is a free for all. This is what we call a clean-up show. Everything that has been left over this year they are going to try to destroy tonight. I heard Paul saying phrases like ‘No cry babies, tear ‘em up, and nothings left running when we’re done.’ So in this case there is no consolation, no second chances or anything. It is an in it to win it event and the last one running gets the most money,” he added.
Several food vendors were on site to accommodate the crowd. Fair board member, Frank Wallace, said that the turnout for the event was good.
“We have a good turnout of about 40 cars for the derby tonight,” said Wallace. “We have been doing this clean-up derby for the past few years and they always put on a good show. The stands are filling up quick and people are still coming in. This is the last big event for the year here at the fairgrounds. The only thing left is the Trunk-or-Treat event at the end of the month. We are working on a more structured schedule of events for next year. We would really like to increase the amount of events that we offer here going forward,” he added.
Sponsors for the event included Ol’ Country Store LLC., Poet, Kuda’s Auto Repair, Vandalia Florist, Betty Davis Insurance, Scott’s Auto repair, Ace Hardware, the 54 Package Store, Center Locker Service, Ennis Implement, Dairy Queen and many others.
Winners of the Big Car class were Gary Robinson in first place; Tyler Splain in second; and Tyler Verdin in third. Winner of the Mad Dog title was Jeff Adkinson. Winners of the Gut-N-Go class were Brandon Werdehausen in first place; Dylan Patrick in second; and Shannon Schmidt in third. Winner of the Mad Dog title was Chris Bagley. Winners of the Compact class were Andrew Jennings in first place; Ronnie Dickens in second; and Memphis Tipton in third. Winner of the Mad Dog title was Ronnie Dickens.