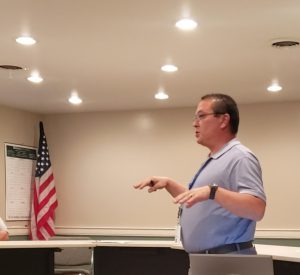 Audrain County officials met last week for the monthly Municipalities meeting at the Lange Building in Vandalia. Present were officials from across the county including Rep. Kent Hayden, R-43, two commissioners, three mayors and Sheriff Matt Oller. Opening the meeting was Associate Commissioner Leslie Meyer, who took a moment to introduced some of the candidates that would be on the November ballot this year.
“I would like to first thank the City of Vandalia for hosting the meeting tonight,” said Meyer. “We have numerous mayors and council members here tonight. We also have Collector-elect Amy Lecount and Recorder of Deeds-elect Teresa Allen. With this being an election year, we are glad to have them here for everyone to meet tonight.”
Audrain County Emergency Director Carl Donaldson explained the explained the need for emergency planning.
“This is kind of a pseudo tabletop that is designed to test policy-level decision makers,” said Donaldson. “This is really meant to familiarize everyone with their roles in an emergency situation. This is also a good opportunity for you guys to think about what resources you have available within your own municipalities,” he added.
As Donaldson went through the slides, he covered situations including weather emergencies. One scenario involved an F3 tornado touching down in Laddonia, Mo. After going through the initial response steps, Sheriff Matt Oller discussed the role of the sheriff’s department in the scenario.
“If something like this were to happen and there was major structural damage, the first thing that we are going to do is close Laddonia,” said Oller. “If you do not live there then you are not getting in. Once we have enough staff on location, we will begin to assist with search and rescue efforts. One big thing to keep in mind is that we do not know everyone, so if you are a resident that was out of town during the storm and you show up after we have closed access, do not be surprised if we don’t let you in. An exception would be made if the person trying to get in could be confirmed as a first responder for that area. We will make every effort to determine whether or not an individual belongs there. Unfortunately, in these situations, there are those out there who would take advantage of communities that have just been devastated by showing up and pretending to be volunteers, only to get in and steal personal property. We do not want that to happen here,” he added.
Donaldson added that there were different phases of a disaster response effort that have to be considered after the initial response.
“There are different phases to think about. If something large scale like this happens, where we have dead people, missing people and injuries, that initial response time is crucial, and not the best time to have a lot of other people showing up. Once we get into the recovery phase, that is when we want to start looking for volunteers who can help out. A good thing to do is take a look at your resources and your public works crews. Taking an inventory of the resources you have such as heavy equipment, would be good to know in the event of needing to clear streets for emergency responders to have a path to the disaster site. Even items such as chainsaws can be crucial to have in the event of a storm that has trees and other debris blocking roadways,” he added.