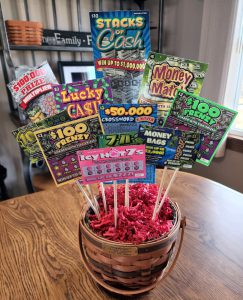 The Modern Maturity Club has announced that it will be hosting a Longaberger Basket Bingo event on Saturday, March 26, at the Modern Maturity Senior Center at 104 E. Joe St. Proceeds from the fundraiser will go toward general upkeep and maintenance for the building. Club Treasurer Cindy Evans said that the building has a long history of serving the community.
“The building is rented out for social occasions such as baby showers, family reunions and graduation parties in the spring,” said Evans. “The Modern Maturity Club uses the building and is in charge of renting it out to the public. At one time, it was used as an American Legion and a VFW meeting hall. The VFW moved to another facility across town and then in the 1970s the Modern Maturity Club acquired the building,” she added.
The Modern Maturity Club currently has approximately 20 members. Just over half of them meet at the building on a regular basis for various activities including playing cards. As a result of generous donations in the past, including a grant from MFA, the building has had recent updates including a new roof, a new sink, and new countertops for the kitchen area. The club typically hosts a barbecue event in the summer, but with inflation rising sharply, the basic upkeep of the building may require a few more fundraiser events. This is the first bingo fundraiser that the club has hosted.
“Our insurance on the building is going up to nearly $1,500 this year,” said Evans. “And then we have our utilities and other bills, which we pay for with the revenue that is generated from citizens renting the facility. We had to make cuts during the COVID pandemic due to a lack of interest in the building. People were not gathering in large groups, so we went for an entire year without taking in money. We managed to get by on what was in the bank account during that time. I was given permission by the club to disconnect our phone services, which saved us approximately $32 a month,” she added.
The Longaberger Basket Bingo will begin with early-bird games at 6 p.m. and regular games at 7 p.m. There will be several different sizes of Longaberger Baskets that have a variety of prizes in them. Each one will have approximately $50 worth of items inside. There will also be drawings and door prizes during the event. Club members are anticipating a good turnout.
“We considered renting the Catholic Church hall for the sake of having more room,” said Evans. “But we decided that it would be much more cost effective to use this building. We can accommodate 120 people and we are expecting that we may have to turn people away due to lack of seating. The evening will probably wrap up around 10 p.m,” she added.
Doors will open at 5:30 p.m., and you must be 18 or older to attend. There will be refreshments available, and extra game packets, as well. Seating is limited, so be sure to plan on coming out early.