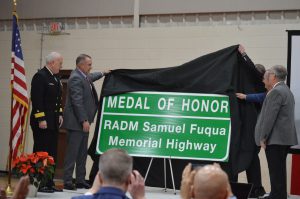 A large group of elected officials joined teachers, students, and members of the public in the Community R-VI high school gymnasium last week to unveil the Medal of Honor sign being installed on Hwy. 54 in Laddonia. The sign honors Rear Adm. Samuel Fuqua, who received a medal of honor for his brave actions during the attack on Pearl Harbor on Dec. 7, 1941.
Cadets from the Missouri Military Academy were present to greet visitors as they arrived in the parking lot. The University of Missouri Naval Reserve Officer’s Training Corps presented the colors for the ceremony. Miss North Kansas City Bri Dinwiddie sang the National Anthem. The invocation was given by Ron Deimeke of St. Joseph Catholic Church of Martinsburg. Master of Ceremonies Tony Robertson recalled Fuqua’s service.
“Samuel Glen Fuqua was born Oct. 15, 1899, on a farm near Laddonia,” said Robertson. “In 1923, after having served in the Army during World War I, he then graduated from the U.S. Naval Academy. He served on the Battleship USS Arizona. Through the 1920s and 1930s he would serve on other battleships. In 1941, then Lt. Commander Fuqua returned to the Arizona as the ship’s damage control officer. He was serving in that capacity on the morning of Dec. 7, 1941, when the Japanese attacked. He was knocked unconscious by one of the bombs. After coming to, he directed efforts to fight fires and rescue wounded crew members. After the ship’s forward magazines exploded, he was the senior surviving officer on the ship. He was responsible for saving the remaining crew members. He was awarded the medal of honor for his actions that day,” he added.
Other speakers during the ceremony included Rear Adm. Philip Sobeck, Ray Bozarth of Sen. Josh Hawley’s office, Lt. Gov. Mike Kehoe, and Chip Nagle, who is the grandson of Rear Adm. Fuqua. Nagle said that he was proud of his grandfather.
“I am honored to be here, and I am proud of my granddad,” said Nagle. “Like many World War I and World War II veterans, he was a humble man. He believed mightily in America and in defending it and also what it stood for. He was color blind when many in our country were not. He worshiped our Savior, and he was a staunch proponent of religious freedom. He passed away believing that our best days are ahead of us as long as our citizens hold democracy in their hearts and fight to defend it,” he said.
At the end of the ceremony, Kehoe was assisted by the speakers in unveiling the large replica sign that had just been installed on each end of Laddonia’s city limits. Visitors received bulletins with the official medal of honor citation that Fuqua received.
“For distinguished conduct in action, outstanding heroism, and utter disregard of his own safety, above and beyond the call of duty during the attack on the fleet in Pearl Harbor, by Japanese forces on 7, December 1941. Upon the commencement of the attack, Lieutenant Commander Fuqua rushed to the quarterdeck of the USS Arizona to which he was attached where he was stunned and knocked down by the explosion of a large bomb, which hit the quarterdeck, penetrated several decks, and started a severe fire. Upon regaining consciousness, he began to direct the fighting of the fire and the rescue of wounded and injured personnel. Almost immediately there was a tremendous explosion forward, which made the ship appear to rise out of the water, shudder and settle down by the bow rapidly. The whole forward part of the ship was enveloped in flames which were spreading rapidly and wounded and burned men were pouring out of the ship to the quarterdeck. Despite these conditions, his harrowing experience, and severe enemy bombing and strafing, at the time, Lieutenant Commander Fuqua continued to direct the fighting of fires in order to check them while the wounded and burned could be taken from the ship, and supervised the rescue of these men in such an amazingly calm and cool manner and with such excellent judgment, that it inspired everyone who saw him and undoubtedly resulted in the saving of many lives. After realizing that the ship could not be saved and that he was the senior surviving officer aboard, he directed that it be abandoned, but continued to remain on the quarterdeck and directed abandoning ship and rescue of personnel until satisfied that all personnel that could be had been saved, after which he left the ship with the last boatload. The conduct of Lieutenant Commander Fuqua was not only in keeping with the highest traditions of the Naval Service but characterizes him as an outstanding leader of men.”