Book walk has a spooky read for October 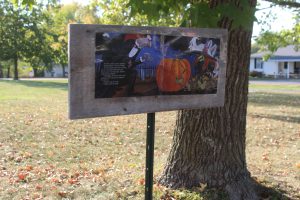 The Book Walk located along the walking trail at Tri-County Park has a new book that has been posted by the Vandalia Branch Library.
It is an appropriately spooky read just in time for the trick-or-treat season. “The Big Pumpkin” book, written by Erica Silverman and illustrated by S.D. Schindler, was published in 1995. The back cover of the book gives a glimpse of the story.
“The witch has grown the biggest pumpkin ever, and now she wants to make herself a pumpkin pie for Halloween. But the pumpkin is so big she can’t get it off the vine. It’s so big the ghost can’t move it, either. Neither can the vampire, nor the mummy. It looks as if there’ll be no pumpkin pie for Halloween, until along comes the bat with an idea to save the day. How can the tiny bat succeed where bigger and strong spooky creatures have failed? You’ll be surprised!”
This October read will be the last book to be posted on the book walk for the year. The Vandalia Branch Library will begin a new series in the spring of 2023. Ruth Nation, who oversees the program, said that they typically use books that are relevant to the season.
“We decided to use a spooky book for the last one of the year because it will be around Halloween,” said Nation.
The Vandalia Branch Library had a tough start to their third season of the Book Walk at the park this past spring. Ruth Nation, who oversees the program, was notified on May 27 that someone had damaged the signposts for the books. When she arrived at the park to survey the damage, she found the signposts wrenched from the ground, lying flat. After quickly making the necessary repairs, the book walk continued despite the setback.
If you are interested in a brisk walk and a spooky story, stop by the Tri-County Park walking trail with the kids and check this one out.