Bobcats take down the Indians in close game 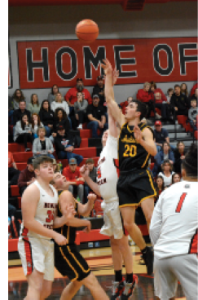 The Van-Far Indians came to Bowling Green to play. It was a close contest throughout the game, but the Bobcats eventually took down the Indians in a 60 – 58 contest.
No. 1 Marcus Starks started off the game, putting the Bobcats in the lead with an inside layup. Bowling Green maintained a narrow lead—16 – 11— through the first period.
Both sides played well, but the Bobcats were able to continue their lead as the buzzer sounded for the half—30 – 22.
It was a back and forth fight in the third period with the Bobcats maintaining a 10-point lead. At the close of the third the Bobcats were ahead 49 – 38.
Van-Far fought back and came within 4 points of Bowling Green with just 21 seconds remaining in the fourth. The Bobcats were able to maintain their lead.
Frequent fouls right at the end, kept stopping the clock and allowed the score to stay close.
The Indians were within 2 points with less than 10 seconds on the clock. A full-court throw sent the ball to a Van-Far player. A last second shot failed, leaving the Bobcats in the lead, 60 – 58.