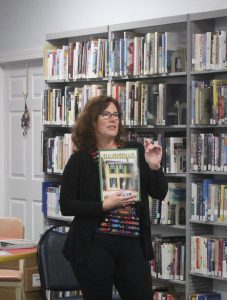 Last week the Vandalia Branch Library hosted Author Dea Hoover, who returned to talk about her new book—“Hannibal; A Walk Through History.” The book, which was released by Reedy Press on July 15, contains interesting facts about Hannibal, Mo., where the author was born. Mare Prosso, assistant director of the library, handled the introductions.
“Welcome everyone to the program today,” said Prosso. “I know that many of you know Dea and have come to hear her speak today. My name is Mare and I am currently the assistant director. I do all the adult programming for the library. That is why I am here today rather than Crystal, who is often introducing programs. We are delighted to have another book available by our local celebrity Dea Hoover,” she added.
Hoover started off by discussing her plans for future books that she has in mind.
“My goal is to write 10 books by the time that I am 60, so I hope to be here another eight times,” said Hoover. “My next book is going to be the Hermann Walking Tour book. After writing the St. Louis Scavenger book, I told my publisher that I wanted to write a book about Hannibal. I was born there, and a lot of people are fascinated with the area. I went on the Haunted Hannibal tour and learned new things about its history that helped me with the book. It has information about Mark twain and Molly Brown included. One of the interesting things about Molly Brown, is that she was never known as Molly until after the Titanic. Before that she was always known as Maggie,” she explained.
The new book also includes many high-quality images of “The Gilded Age Mansions” of Hannibal, a history of notable women of Hannibal, and an interesting section titled, “Cemeteries, Caves, and Chaos.” Hoover also included a section about a little-known nature preserve that is perfect for those who enjoy hiking.
“The Sodalis Nature Preserve has a trail that many don’t know about. The preserve is named after the local species of bat that is commonly called the “Indiana bat.” Transformed from abandoned limestone quarries into an inviting nature preserve, the 200-acre preserve attracts visitors of all species. Today, the Iowa Natural Heritage Foundation holds the conservation easement of the property. The Hannibal Parks Department owns and manages the Sodalis Trail. All known entrances into the 26-mile mine system are gated,” said Hoover.
According to her website, “Arewethereyetdea.com,” Hoover has been in the tourism and travel industry since 2000, working her way from a tour guide to running two tour companies: Discover St. Louis, a full-service receptive since 2008 as well as founding her outbound tour company, Are We There Yet? in 2005. She is also deeply committed to tourism in Missouri, currently serving as a St. Louis regional representative for Missouri Travel Council, vice president of the Hill Business Association, and the past president of the St. Louis Professional Tour Guide Association. She is a board member of the Washington University in St. Louis Women’s Society as well as the St. Louis Actors Studio. A native of Vandalia, Mo., Dea graduated from Washington University in St. Louis with a BSBA and a minor in English Literature.