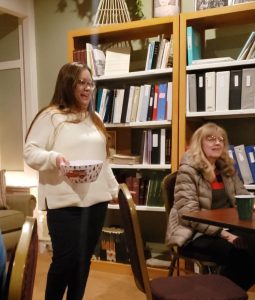 Members and guests of the Vandalia Area Chamber of Commerce met at the Charlene Teague Genealogy Center last week for the annual chamber Christmas party. Christmas music was heard on Main Street as guests arrived, courtesy of the Historical Society Museum’s outdoor speaker system.
Although the number of attendants was down dramatically from the previous year, because of the flu, there were still enough people to enjoy snacks and participate in the gift exchange. Chamber member Ramsey Dickerman explained the game that would be played for the exchange.
“When the first name is drawn, that person will have the opportunity to pick any gift from under the Christmas tree,” said Dickerman. “The second name that is drawn, will have the opportunity to either pick their own gift or steal the previous person’s gift,” she added.
Last year, there were numerous examples of stealing, as one guest would unwrap and reveal a desirable item only to have it stolen by the next person. Little changed during this year’s exchange, as the group of watchful participants set their eyes on some of the more enticing gifts, such as a large container of cashews and an interesting T-shirt. After the exchange was finished, Dickerman handed out door prizes and expressed her regret that so many were at home sick during the event.
“Unfortunately, our chamber president and many others are at home sick tonight. Sometimes we have a really good turnout and other times we have only a few. But no matter what, it is always nice to get together. We really appreciate everyone coming tonight and we are looking forward to next year. We work hard all year as a chamber and it is nice to be able to get together and relax, get to know everybody and to simply celebrate being chamber,” said Dickerman.
Numerous local businesses were represented during the evening despite only have about 12 people at the event. Everyone engaged in conversation and took advantage of the snack bar, that had plenty of options such as chips and homemade dip, pretzels, finger foods, cookies and other treats. The event ran from 6 p.m. to about 8 p.m.
The Vandalia Area Chamber of Commerce meets on the second Monday each month at noon at the Spare Time Bowl and Grill located at 1201 Hwy. P in Vandalia.