Annual cruise night draws classic cars for a cause 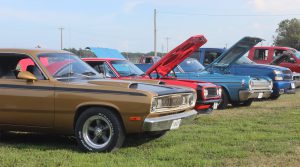 The sound of roaring engines and rumbling exhaust, coupled with the smell of burning rubber filled the air in Vandalia Saturday night. It all started at the Vandalia Area Fairgrounds, where drivers were lined up for the 4th annual Todd Cutright Cruise Night. The event, which is organized by “The Compound Mafia” included a car cruise, a silent auction, a live auction and the sale of food and beverages. A member of the group, Kyle Campbell said the event is to honor Todd Cutright.
“Todd Cutright graduated in 1987,” said Campbell. “We all ran around together back in the day when we were younger. We did all the normal high school stuff like cruising up and down the road and around town on Friday and Saturday nights. Todd moved out of the area for a time and drove a truck. After he moved back to the area, he expressed that he wanted to form a group and do a cruise night again. He passed away before it came to fruition. Now, every year, we hold a car cruise to raise money for a good cause,” he added.
Another member of the group, Tamra Cutright Eckler, Todd’s sister, said the first cruise was in honor of her brother.
“The first year that we did the cruise was 2019 … and we donated the proceeds to the Alzheimer’s Foundation. This year, it is for Tim Perkins, who passed away in short proximity to his daughter. The proceeds of the event will go to his wife, who recently suffered a heart attack,” said Eckler.
After leaving the fairgrounds, the line of cars and trucks made their way down Main Street. A group of spectators watched and waved as the drivers passed the four-way stop at Main and State Street. Campbell said that the group quickly grew after it formed.
“In 2020, several other people became involved with the planning of the cruise. We self-named ourselves ‘The Compound Mafia,’ after Todd’s home base in Elsberry, Mo., that he would often refer to as ‘The Compound.’ We decided that along with honoring Todd’s memory, we wanted to help other Van-Far classmates and or their families in need,” said Campbell. “In 2020, we honored Rick Allen ’73, who passed away in 2018, with that year’s proceeds being donated in his name to the Van-Far Booster Club. In 2021, we honored Richard ‘Dicky’ Collier ’86. Dicky passed away in 2020. Two-thousand dollars was raised and given to his children to help cover funeral expenses. For the 2022 cruise, we have decided to honor Tim Perkins, who passed away in 2022 due to COVID. Soon after Tim’s passing, his daughter, Amanda, passed away from COVID, but had other medical issues also. This year’s proceeds will go towards medical expenses for the Perkins family. This event would not be possible without sponsorship and donations from the community,” Campbell added.
Sponsors and donors of the event included Vandalia Auto Sales, Betty Davis Insurance, Grand Vandalia Hotel, MFA, Ace Hardware, Sydenstricker, Vandalia Florist, Ol’ Country Store, Waters Funeral Home, Cordelio Power, United Credit Union, Precision Eye Care and many others.