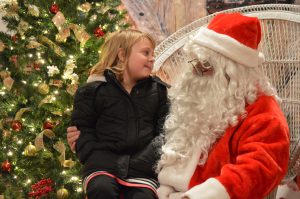 Viewers watch from all over the country

It was the 2nd annual Lighted Christmas Parade that lit up Vandalia last Saturday evening. Crowds of people poured onto Main Street for the night of activities, which included the annual Christmas From a Small Town Heart event hosted at the First Baptist multi-purpose building.
Dozens of volunteers were serving hot chili, soups, hot dogs, coffee and hot chocolate—all for free to those who had come out for the community celebration. As the parade was live streamed on the Vandalia Leader Facebook page, viewers commented that they were watching from states all over the country, such as Florida, Texas, North Carolina and Washington. Mayor Ralph Kuda, who was mingling in the crowd with his wife, said that it was a good night for Vandalia.
“This was great for Vandalia,” said Kuda. “We had a lot of people show up and I believe there were more than 60 floats in the parade tonight. I heard that there are people from Clarksville, Eolia, Louisiana and Wellsville here with us,” he added.
Santa was seen coming down Main Street on his motorcycle at the end of the parade. As he made his way into the historic church building, a long line was forming to go inside and meet him. While the children visited with Santa, Christmas carols were being sung on a stage outside the building. Lori Culwell, who organized the Christmas from a Small Town Heart event, said that the turnout was greater than last year.
“It was a busy day, and I would say we had more people than last year,” said Culwell. “More than 200 people came through and we moved a lot of merchandise today. We wrapped over 1,000 gifts and we had a lot of people leave with armloads of unwrapped items, as well. It was a good day. We will be taking what few items are left over back to the school for any children who didn’t have the opportunity to be here today,” she added.
Last year the event was held at the elementary school but was changed to the First Baptist multi-purpose building on Main Street to accommodate those who were downtown for the parade and for the visit with Santa. First Baptist Pastor Brian Lehenbauer said the church was happy to assist with the event.
“We were happy to help,” said Lehenbauer. “It was a good day, and all of the credit goes to Lori Culwell and all the volunteers who were helping out with the event,”