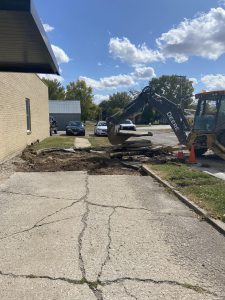 The Board of Aldermen of the City of Vandalia met on Tuesday, Oct. 11 at 5:30 p.m. at the Lange Building for regular session. Mayor Ralph Kuda called the meeting to order. After the approval of the agenda and the September minutes, City Administrator Darren Berry recommended the approval of reconstruction and expansion of the drive-through at City Hall.
“The new drive-through window that was installed earlier this year does not reach out as far as the old one did, making it difficult for our customers to access it without them getting out of their vehicles,” said Berry. “We would like to reconstruct and expand the drive-through at a cost not to exceed $3,000. This project would consist of removing the existing drive-through and construct a new one that will be approximately two feet wider. This will bring the driving surface closer to the window. Also, we will widen the exit and change the angle of it. This will make it easier and more convenient for our customers when they pull out into the street,” he added.
After some discussion, Alderman Weiser made a motion to approve the reconstruction and expansion of the drive-through. Alderman Shaw seconded the motion, which passed unanimously.
An ordinance repealing and replacing certain sections of chapter 720.010 of the City Code of the City of Vandalia, Mo., was discussed. Berry explained that over the past several years, staff have received many requests from customers to change the utility bill due date.
“They have been asking if the city would consider changing the due date on our utility bills from the 10th to the 15th of each month,” said Berry. “If this item is approved, the only other thing that will change, other than the due date and penalties, is that we will no longer be mailing out delinquent notices. This will be a cost savings to the city because we will not be purchasing anymore delinquent notice cards or postage for those cards,” he added.
After some discussion, Alderman Shaw moved to hear the bill the first time. Alderman Turner seconded the motion, with Alderman Hopke casting a dissenting vote. City Attorney Amy Rost read the bill the first time. Alderman Turner moved that the first reading of the bill be approved. The motion was seconded by Alderman Wenzel and the votes were recorded as follows: “Aye”: Wenzel, Wheeler, Turner, Weiser and Shaw. “Nay”: Hopke. Alderman Wenzel moved that the second reading of the bill be heard. The motion was seconded by Turner, with Hopke casting a dissenting vote. Rost read the bill the second time. Turner moved that the second reading of the bill be approved. The motion was second by Weiser, and the votes were recorded as follows “Aye”: Wheeler, Shaw, Wenzel, Turner and Weiser. “Nay”: Hopke. Bill No. 22-1231 was duly passed and approved, and the same shall hereafter be known as Ordinance No. 22-1231.
Administrative Assistant Jennifer Young gave an update on the 2022 Family Aquatic Center season.
“The Aquatic Center was open from May 28, 2022, through Aug. 14, 2022,” said Young. “The pool was only closed three full days and closed early two days this season because of weather. The Aquatic Center’s budget took a hit at the beginning of the season as the “Features Pump” failed. This pump was an original pump, put in when the pool was constructed. As this was unforeseen, it was not budgeted for, costing the city roughly $9,000. The other pump that runs the pool, the “Main Pump,” is also an original model. Plans are in place to add a new pump to the Capital Improvement funds for next year, so we do not run into this problem again.
Cash registers were used to track admittance and concession sales again this year. Throughout the year, paid daily admission exceeded the daily season pass admission on all but eight days. Approximate attendance overall for open swim was 6,647 and Aquacise was 59. 63 children enrolled in swimming lessons and 16 parties were held throughout the season. The managers and I have discussed adding a fourth week of swim lessons next year, as all of our classes were full. We are also considering raising the price of lessons next year to compare with surrounding facilities. A total of 166 full-price ($60) season passes were sold and 26 additional family member ($20) season passes were sold. Pool pass prices increased this year. Concession prices at the Aquatic Center were raised this year due to the increase in purchasing prices. The Aquatic Center grossed $11,634.50 through the sale of ice cream, pizza rolls, chips, cookies, etc. All concessions were available daily,” she added.
During his report, Berry explained to the board that Ameren has been working on their statewide AMI implementation project.
“They have been meeting with various coops and cities throughout the state. As their project evolves, new areas are uncovered requiring additional discussions and agreements. This became the case with the City of Vandalia. Staff meet with representative from Ameren to explain the project and discuss next moves. During those discussions, it was agreed that the best avenue to move forward is an Operational Agreement between the City of Vandalia and Ameren Missouri. We agreed upon a five-year agreement that will automatically extend each year after that, unless either party gives a 90-day written notice wishing to terminate the agreement. Ameren will pay the city a yearly rent charge of $108 per pole, per year,” said Berry.
After some discussion, Hopke made a motion to approve the operational agreement between the City of Vandalia and Ameren Missouri and authorized the mayor to sign the agreement. Turner seconded the motion, which passed unanimously.
Having no further business to discuss, at 6:20 p.m., Hopke made a motion to adjourn from regular session and enter into executive session. Turner seconded the motion, which passed unanimously.