ACHD to establish award in honor of Bill Johnson 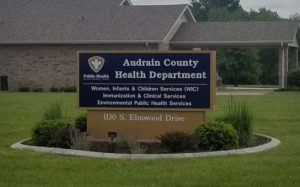 The Audrain County Health Department has announced the recipient of its inaugural William “Bill” Johnson Advocate for Public Health Award. ACHD Administrator and Chief Executive Officer Craig Brace says the award will be presented to current ACHD Board of Health member and former board chair Dr. Kathleen Weaver. Weaver will be presented with the award at a dinner and ceremony at the Presser Performing Arts Center on Tuesday, Nov. 8, 2022, with a 6 p.m. start time with dinner served at 6:30 p.m. The award ceremony will follow the dinner. The dinner is open to the public and costs $25 per ticket or $200 for a table of eight people. The proceeds from the dinner will go to help support the ACHD Team For Assistance program.
“I couldn’t think of anyone more worthy of the inaugural award than Dr. Weaver and am pleased the selection committee agrees,” said Brace. “She has been a tireless champion for our overall mission of Prevent, Promote and Protect here at the health department,” he added.
Weaver was the chair of the health board when the COVID-19 pandemic began in 2020 and only recently stepped away from that role, which allowed Johnson’s daughter Jessica Johnson-Ekern to fill the role by a vote of the board. Ekern was elected to the board in the April 2020 municipal election.
During the response to the pandemic, Weaver was responsible for making sure the health department staff had everything needed to respond in a timely manner to the needs in the county and proper medical protocols were being followed.
“Weaver was an integral part of our county’s response to the pandemic and, it was her leadership during it that positioned Audrain County to be one of the leaders in response to the pandemic in the form of mass vaccination clinics we held,” Brace said. “Throw in a leadership change in the middle of it in late 2020 and her leadership became even more invaluable. To this day, she remains an integral part of the Audrain County Health Department’s Board of Health.”
Ekern echoed those sentiments in her reaction to the news Weaver was selected to receive the inaugural award named after her father.
“My dad left such a legacy in the public health world, especially in Audrain County,” Ekern said. “To have an award named after him is a true honor and to have someone of the caliber of Dr. Weaver be the first recipient is a fitting tribute.”
Johnson was the first administrator of what was then known as the Audrain City-County Health Unit, appointed in 1963. Addressing environmental health issues on both the local and state level, he was a pioneer. Johnson was responsible for many of the state’s ordinances and health policies dealing with this area of public health when it was first being addressed in the late 60s and early 1970s. Recognized statewide and nationwide for his accomplishments in the field, Johnson’s environmental health program became a model for other counties and states.
Dr. Weaver graduated from the University of California at Irvine School of Medicine and became board certified in orthopaedic surgery in 1995. She has been practicing in Mexico since 2001. Before coming to Mexico to establish a practice, Dr. Weaver was in residency at the Maricopa Medical Center in Phoenix, Arizona and then held a fellowship at the Shriner’s Hospital for Crippled Children in Honolulu, Hawaii in the Pediatric Orthopaedic department. She is affiliated with the Moberly Regional Medical Center in Moberly, Missouri; the Scotland County Memorial Hospital in Memphis, Missouri; and the Surgery Center of Columbia in Columbia, Missouri. She is also an associate staff member of the University of Missouri. She is a fellow of the American College of Surgeons and the American Academy of Orthopaedic Surgeons. She is also a professional member of the American College of Sports Medicine, the Wilderness Medical Society, and the Orthopaedic Trauma Association.
The Audrain County Team for Assistance program is a not-for-profit corporation under the Audrain County Health Department. Its purpose is to provide temporary help for medications and healthcare services for those that are not able to afford it in Audrain County. The money raised from the awards banquet will benefit this program going forward for the residents of Audrain County.
To reserve a seat to the awards dinner on Tuesday, Nov. 8, 2022 at the Presser Performing Arts Center, call the ACHD at 573-581-1332, or online at achd.eventbrite.com. Reservation deadline is November 1st. Tickets go on sale this Friday, September 30th. A single ticket is $25 or complete tables are available for up to eight individuals for $200.
The 2022 Advocate Award selection committee is comprised of ACHD Board Chair Jessica Johnson-Ekern, Mexico Area Chamber of Commerce Executive Director Dana Keller, Audrain County Presiding Commissioner Alan Winders, Arthur Center Executive Director Terry Mackey and ACHD Administrator and CEO Craig Brace.