A year in review: more headlines from 2022 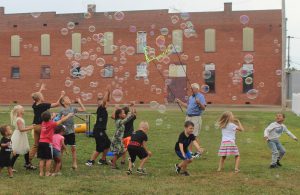 Last week we shared the headlines that were on the cover of the Vandalia Leader for the first half of 2022. This week we pick up where we left off, in the month of July, when summer events were drawing crowds to Vandalia.

July 2022
Summer Palooza at the Vandalia Area Fairgrounds: Crowds of spectators poured into the Vandalia Area Fairgrounds on Saturday for the Summer Palooza day of events. Beginning at 10 a.m., there was a lineup of classic cars for auto enthusiasts to take a close look at. Entertainment scheduled for the evening included the band PopSkull Rebels out of Kansas City, Mo. Student shares experiences from Girl’s State: Vivian McFadden, who will be a senior at Van-Far High School this year, recently came back from a week of activities at Girl’s State. She had been selected as a candidate during the last quarter of the 2021-22 school year. Valencia’s Restaurant celebrates grand opening: Anxious patrons lined up outside of Valencia’s Restaurant last Saturday for the grand opening of the establishment. At 3 p.m., the Vandalia Area Chamber of Commerce held a ribbon-cutting ceremony for the new business.

August 2022
Professor Bubbles visits the Vandalia Library: The Vandalia Branch Library ended its summer program schedule last week with a big, soapy finale. Large bubbles could be seen floating down Main Street as the sound of children laughing carried across the library lawn. Surveying begins for addition of third lane on Hwy. 54: Pike and Audrain County officials met last Thursday at the Eastern Family YMCA in Vandalia for an update on the efforts to make Hwy 54 a three-lane highway from Mexico to Louisiana.

October 2022
Van-Far celebrates 2022 Homecoming: The 2022 Van-Far Homecoming Day of events started off last Friday afternoon with a pep rally at 1:50 p.m., followed by Special Olympics at the Van-Far High School. At 4:30 p.m. the Homecoming parade made its way down Main Street as onlookers waved at the passing participants. Planning begins for Vandalia’s 150th celebration: The Vandalia Area Historical Society was joined by members of various groups and organizations on Saturday at the Charlene Teague Genealogy Center. They had been invited to participate in the first of several planning meetings for the 2024 Vandalia Sesquicentennial celebration.

November 2022
Van-Far hosted Veteran’s Day ceremony: The 2022 Van-Far Veterans Day celebration took place last Friday in the high school gymnasium. Junior High Communication Arts teacher Teresa Winders welcomed the guests to the event. Van-Far holds ribbon cutting for new athletic track: Members of the Van-Far R-I school district held a ribbon cutting ceremony for the newly completed track and field last week. Superintendent John Fortney said that a grant paid for half of the expenses of the construction. Ennis Implement celebrates 75 years in business: To show their appreciation to customers, Ennis Implement hosted a pancake and sausage lunch on Wednesday, Nov. 2, at their Vandalia location at 1117 S Main Street. Owner Phillip Ennis said that there was a good turnout for the event.

December 2022
Standard Wellness holds ribbon cutting ceremony for marijuana cultivation facility: Standard Wellness celebrated the opening of its $15 million marijuana grow facility with a ribbon cutting ceremony last Thursday. Located just outside of Vandalia, investors, city officials and members of the media joined with employees for a presentation, lunch and a tour of the facility. Annual Christmas Parade lights up Main Street: It was the 2nd annual Lighted Christmas Parade that lit up Vandalia last Saturday evening. Crowds of people poured onto Main Street for the night of activities, which included the annual Christmas From a Small Town Heart event hosted at the First Baptist multi-purpose building. Ceremony unveils Samuel Fuqua Medal of Honor sign in Laddonia: A large group of elected officials joined teachers, students, and members of the public in the Community R-VI high school gymnasium last week to unveil the Medal of Honor sign being installed on Hwy. 54 in Laddonia. The sign honors Rear Adm. Samuel Fuqua, who received a medal of honor for his brave actions during the attack on Pearl Harbor on Dec. 7, 1941.